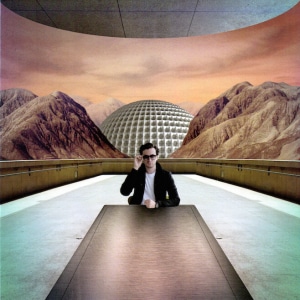 The concept of a ‘soundtrack to an imaginary film’ is a well-trodden one, but it’s one that has kept Ben Garrett busy for the last five years. Back in 2009, Garrett (who is, to all intents and purposes, Fryars) released his debut album Dark Young Hearts to an enthusiastic if guarded response and then begin what turned out to be a lengthy hiatus. It’s been a tough journey for Fryars, with bitter squabbles with his old record company 679 resulting in a long gestation period for Power, which eventually sees the light of day thanks to a new deal with Fiction.

Garrett has indeed described Power as a ‘soundtrack to a 30-page unfilmed script with pictures in it’ and there’s certainly a very cinematic feel to the whole album – albeit more of a quirky indie thriller than a huge Hollywood blockbuster. There are weird little snatches of dialogue, incidental 30 second instrumental interludes and songs that veer off into wholly unexpected avenues. Thankfully though, Garrett is too good a songwriter to produce a completely obtuse record, and most of the songs gathered on Power are accessible and, at times, frighteningly catchy.

There’s also a gorgeously lush production, courtesy of Luke Smith and Rodaidh McDonald, which gives Fryars an otherworldly atmosphere – at times, such as the opening On Your Own or the ghostly Love So Cold, you can almost imagine Garrett floating in space, looking down on Earth as he croons away. On other occasions, such as Cool Like Me, he sounds possessed by the spirit of Daft Punk, while on others he turns his hand to a grandiose piano ballad like Thing Of Beauty. As you may have guessed, Power is a wildly disparate album, which works both for and against it.

For it’s impossible to listen to Power without thinking that it’s a collection of great songs, rather than a great album. It doesn’t really hang together well, which is curious given that so much thought has obviously been put into the sequencing (beginning and closing with the brief instrumentals Power Up and Over & Out). Perhaps part of the problem is the little interludes and skips, which just end up destroying the album’s momentum – (Dialogue 1) and (Dialogue 2) appear to tell the dark story of a man named Willow who may or may not have killed someone, but it’s impossible to care too much as you just want to get back to the songs.

It’s a shame, as those songs can be pretty special at times. China Voyage introduces itself with some Eastern influences before Garrett channels his inner Scott Walker and delivers the best Bond theme yet to be recorded, and both Can’t Stop Loving You and Don’t Make It So Hard On Yourself are beautifully off-kilter emotional ballads, demonstrating a strong knack for a hook which makes it clear why people like Lily Allen and Rae Morris are queuing up to work with him. Prettiest Ones Fly Highest even brings some hip-hop beats into the mix, sounding like a distant cousin to Jay-Z‘s Girls Girls Girls.

It’s fair to say that sometimes, Power’s laudable ambition means that the album trips over itself. However, despite some flaws, it does make for a great showcase to remind everyone just what a brilliant songwriter Ben Garrett can be.