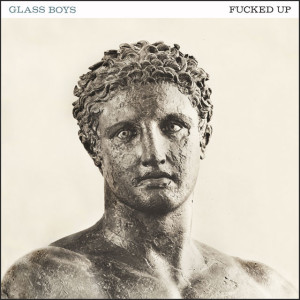 Fucked Up has never been a band to stand still for long, or do anything by halves (although Glass Boys will be available as a special edition featuring half-time drumming). They’ve never really fitted into the punk/hardcore templates that might otherwise have defined their sound, preferring to twist the form and plough a more winding furrow. The biggest problem they’ve faced must surely have been how to top their previous effort, David Comes To Life. A sprawling, post-modern concept album, it was a massive step forward for the band, who not only created a fantastically complex narrative structure for the album but also wrote a mass of well crafted songs to compliment the story.

In addition, they created a fictional UK town, Byrdesdale Spa, for David the main character to inhabit, and wrote the album David’s Town as a form of scene setting. In reality David Comes To Life was more than just a concept album, it was a sprawling artwork with a life of its own and a glorious testament to the vision and ambition of the band.

Glass Boys sees the band revisiting more concise musical forms, but as ever, there is a point to the album. The notions of growing older, responsibilities and compromise seem to be troubling the band, and in particular, vocalist and focal point Damian Abraham; clearly he’s has been looking inward and asking some searching questions. Opening track Echoboomer makes no bones about it. From a relatively delicate opening the album bursts into life with Abraham’s serrated roar holding its own above the colossal thrum of his band. “I can still hear who I was meant to be. I’m the reflection of a dream” he howls as he battles with the idea of staying true to himself by exploring his past. The conclusion he appears to draw is that his words and the band’s music will outlive him, but there is hope that he’ll hang on to his youthful ideals in the line: “I can still be the boy I used to be.”

Conflict runs through many of the songs on Glass Boys, The Art Of Patrons looks at selling out, but offers explanation as well as guilt. “We traded our moral high ground so they could sing along,” Abraham bellows, before adding “they are spinning in their graves at the choices we have made…in our shoes would they have been so chaste?” The song itself is one of the more melodic moments on the album, with guitar lines tumbling over each other beautifully and topped off with smart vocal hooks. Fucked Up’s ability to add pop dynamics has long set them apart from the pack, but perhaps it is no coincidence that those “parlour tricks” (to borrow from the lyrics) are employed on this particular song. Warm Change follows and looks at the other side of the coin whilst railing against the concept of paying for music/art and the effects of money on a person’s creative outlook.

These themes crop up time and again throughout the album, whether dressed up as Greek tragedy or the totally fucked up (but musically bright and uplifting) introspection of the title track. The songs often contradict each other too, for example Glass Boys directly challenges Echoboomer by stating that “I’m not an echo boom, but a whimper”. Lyrically, it’s a complex and confused album, but fortunately, the band has once again created a forceful and harmonious backing for Abraham’s questioning tone. They’re still feeling and sounding impassioned, even if Abraham might suggest otherwise on the charging anthem of Paper The House. “To see a young man turn parody. But nothing is more uplifting that finally admitting you were living a lie,” he growls, hopefully with his tongue firmly in his cheek. As usual there’s a lot of depth here and over time, more and more will be revealed. Glass Boys might not be as expansive as its predecessor, but it is no less impressive. Fucked Up might be questioning themselves, but if this is their mid-life crisis, then they really don’t need to worry.