Fucked Up – Dose Your Dreams 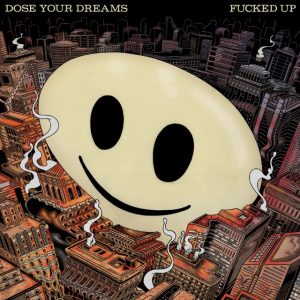 Dose Your Dreams, the first album from Fucked Up in four years, is unquestionably the band’s most ambitious work to date. And let’s not forget that this is the band that made the tremendous rock opera David Comes To Life – a tale of resistance, identity and heartbreak that involved unreliable narration and complex worldbuilding.

This band is now two-thirds of the way through its Zodiac series, a prolonged song cycle of epic tracks based on each of the 12 signs of the Chinese Zodiac. Fucked Up have pushed hardcore punk to its limits and beyond while remaining true to its spirit. With Dose Your Dreams they push it even further – and deliver the best record of their career so far.

The album’s lineage goes back to the character of David Eliade, first introduced in Fucked Up’s debut LP, Hidden World, back in 2006, and the fulcrum of 2011’s David Comes To Life. That album was set in Thatcherite Britain and in it we found David working in a lightbulb factory – a symbol of potential illumination in an austere, monochrome landscape. Dose Your Dreams is far more colourful, but at the start of the album David is having a pretty grey time in his office job. That changes when he’s inspired out of that job by a sorceress called Joyce Tops, who he finds living in a bin. The adventure he’s taken on – and in which we are immersed as listeners – is magical realist, hallucinogenic, even psycho-therapeutic.

Musically, this sprawling double album is a real leap forward for Fucked Up. In David Comes To Life the oppressiveness of the setting was reflected in the intense, claustrophobic sound of the record. Dose Your Dreams isn’t without its heavy moments – this is a Fucked Up album after all – but it sometimes sounds like the kind of music you imagine David and his friends might have been listening to in the 1980s. There’s disco, powerpop, Krautrock, stomps and grooves. There’s noise, industrial. You can even detect the influence of jazz.

The fourth track, Normal People, is the first sign that new territories are being visited: it starts with a moody, spoken word introduction from guest vocalist John Southworth, then blooms into a stadium-filling North American rock song, music of open roads and dive bars. As with several of Dose Your Dreams’ songs, frontman Damien Abraham’s vocals kick in partway through, and this trick in fact enhances his might.

The indie rock leaning that Fucked Up have always expressed to some degree is allowed to make itself fully known: The One I Want Will Come For Me and Came Down Wrong both sound like lost C86 tracks; and Love Is an Island in the Sea is a mix of keening melodies and Beach Boys style harmonies. Talking Pictures leads us from sombre, dream-like beginnings into an unashamedly extroverted guitar riff. The title track is a true joy, its foundational disco strut is repeatedly broken down and reconstructed before Abraham’s vocals enter over halfway through and explode the whole thing.

All this is largely the work of guitarist Mike Haliechuk, who has taken the lead on the songwriting while Abraham has taken a back seat. Abraham’s unmistakeable voice continues to hold everything together – on tracks like Accelerate and Living in a Simulation he’s an outright powerhouse – but there are more voices than have been heard in any of Fucked Up’s previous work. These include Haliechuk, drummer Jonah Falco and a host of guest vocalists including J Mascis, Sauna Youth’s Jen Falleja and Canadian singer-songwriter Jennifer Castle.

It’s this diversity of voices that gives Dose Your Dreams much of its character and warmth – and even in its heaviest moments this is warm music, rich in soul and spirit. It’s fantastically bold, incredibly clever and utterly life-affirming. Fucked Up have created a masterpiece that pushes boundaries, takes risks and delivers huge rewards.