Fucked Up – The Chemistry Of Common Life 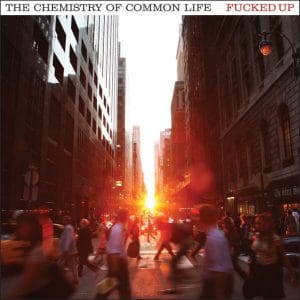 Fucked Up is the type of music your mother, Mary Whitehouse and the NME warned you about. This is the devil’s music, screamed at you by a bald-headed fat bloke called Pink Eyes who makes The Flaming Lips‘ Wayne Coyne look sane, Frank Gallows look like a youth worker and Les Savy Fav look like the best bet of the night to go home with. Okay, so that last one is a lie. But the other two statements are true.

This, of course, makes Fucked Up completely and utterly amazing. On record, they sound as if they’d be even better live. Live, they almost certainly are, from the look of the photos that are allowed to be printed and the trail of destruction and wrecked studios they leave in their wake.

All of this completely lives up to the promise of a band whose existence was first revealed to this reviewer by their fellow Canadians The Tranzmitors, while the poor lads were being simultaneously interviewed and terrorised by a Camden acid casualty trying to tell them they were the best band since Flowered Up. Did he mean Fucked Up, the Canadian hardcore band, they asked? He didn’t, but any band mixed up in an anecdote like that deserves to be explored. After hearing Fucked Up, you can’t help but feel such experiences follow them around.

Just to screw with your head completely, between the Velvet Underground drumming, the psychedelic feedback and the screaming, there’s something particularly endearing about the gentleness and almost classical influence of some of the intros. Those of both the opening track and Golden Seal leave you sure they’re lulling you into a false sense of security and comfort. Any minute, they’re going to break a bottle (literal or sonic) over your head again, aren’t they?

In the case of Son The Father, the answer is yes; in the case of Golden Seal it’s yes again, but at least not until the next track. Ditto the instrumental-only Looking For God, which sounds like the last place you’re likely to find him tonight.

While you may not always want to turn off an album feeling that you’ve been physically assaulted, every now and again such an experience can be oddly cleansing, detoxing you of all that melody nonsense you thought you wanted in favour of a good old ruck in the mosh pit.

With a previous album and an 18-minute single behind them, plus a staggering 70+ tracks overlaid on some of The Chemistry Of Common Life’s Offerings, Fucked Up are certainly not background music for a polite dinner party. They’re more Pixies fronted by a man who was sent by the devil rather than who simply believes in him, far too dangerous and far too attractive to ignore.

They are like nothing you’ve ever heard before and everything you one day hoped you would, too strong for the charts and too corrupting for MTV. They are Fucked Up in every sense of the word and with one hand on our heart and the other on our bleeding ears, we salute them.