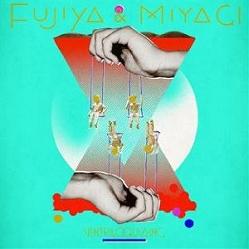 Proving that time is moving faster than ever, Fujiya & Miyagi return with their first album in two and a half years. So if it only seems last week they were proclaiming the delights of “vanilla, strawberry, knickerbocker glory”, here they are again in sotto voce, crying over spilt milk amongst other things.

Not a great deal has changed in their sound, but the edges now have a steely glint that wasn’t there before. Soft vocals emote with a subtle cleverness, the lyrics encouraging a wry smile here, a light frown there. Strip the words away, and the twosome are hard at work with background noises, throwing krautrock, light electro, and even a frisson of Hammer horror into the mix with some weird organ effects.

This gives what ought to be a relatively calm listen a frisson of darkness. Minestrone builds up far more than you might expect from a track bearing such an inconsequential title, while on Cat Got Your Tongue, David Best remarks on how “you don’t know which side your bread is buttered on”. The whispered tone carries just a hint of menace.

Unfortunately genuinely memorable tunes are in relatively short supply, compromising the immediacy of the record. For it to fully reveal its layers and subtle treasures several listens are needed, so that elements such as the lightly spooky organ dressing Taiwanese Roots can be enjoyed.

The music is hypnotic. Spilt Milk behaves as if floating aimlessly in outer space, passing through hints of warm nebula and cold rock, its lack of rhythm enhancing the lack of gravity. The little bleeps that give Pills a hallucinatory edge do so with a mixture of charm and paranoia, while in Tinsel and Glitter the pair’s sound world gets a more earthbound rhythm. “A pair of red shoes can’t sing the blues”, muses Best. Quite.

Strangest of all is the closing Universe, stumbling around in the dark as if searching for the bed without a light. Beginning with an unaccompanied vocal that proclaims, “you love to hear the sound of your own voice”, it soon brings in the heavy set rhythm, turning in an ever increasing circle of restlessness, refusing to settle until the end.

It seems, then, that Fujiya & Miyagi have been exploring some new sounds, watching a lot of films by night, and keeping their diary of lyrical vignettes close to hand. Ventriloquizzing is a real night time album, and should be enjoyed as such – just don’t expect an abundance of melodic pop hooks and you’ll return for repeat prescriptions.