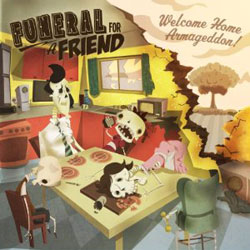 Funeral For A Friend‘s fans don’t do lukewarm. They don’t do quiet appreciation. They’re a group whose solitary state of being is a kind of shrieking apoplexy in direct keeping with the music they love. With this lot, it’s a given that a new album by their Welsh post-hardcore idols should immediately spark a hysterical stampede to HMV in the manner of the rage-filled zombies of 28 Weeks Later, storming over a field trying to eat Robert Carlyle’s kids.

So, when 2007’s Tales Don’t Tell Themselves failed to charm these same fans with its conceptual yarns about a lonely fisherman, and follow-up Memory And Humanity landed to no more than muffled murmurs of discontent about a perceived change in direction towards stadium-friendly crowd-rock, it would have been understandable if Matt Davies and co had exchanged a few nervous glances about their turn to the soft, and thought about a drastic return to what they know.

So it was that last year’s Young And Defenceless EP, a limited release, was widely taken as conscious effort to reconnect with the disillusioned with a shift back to their emo-metal roots and a distinctive return of their post-hardcore chug. And hot on its heels, new release Welcome Home Armageddon is once again causing brays of undead fervour amongst the FFAF-faithful. But those expecting a return to the days of Casually Dressed will be left wanting.

Armageddon is definitely a harking back – but not to the first album’s glories. Instead it finds itself mired in a non-specific point in mid-noughties metal and, while there’s proficiency in its recreation, FFAF seem to have too vague a view of this new direction for anything here to be on a par with Juneau, or Roses For The Dead.

Where it works, as on the punky Aftertaste, all brattish holler and incendiary riff, or in the atavism of Front Row Seats To The End Of The World, a glorious mix of The Dillinger Escape Plan‘s rawness and the type of loaded choruses beloved of Alexisonfire, there’s a potent tension between untrammelled, hardcore energy and a sound that’s both tightly-bound and highly crafted.

Yet FFAF struggle to retain this balance. Too often, Welcome Home Armageddon feels over-designed, and smoothed-out to the point of blandness. Sixteen feels flat like a Fall Out Boy B-side; Man Alive is inoffensive filler; while Owls (Are Watching) veers between moments of chunky, riff-filled wonderment to insipid meandering. There’s still much to like – but almost zero to excite.

What Welcome Home Armageddon achieves is a recovery of the sculpted aggression beloved of the Funeral For A Friend fans. But they fail to turn this into anything bold or new. And ironically, playing it safe could be the bigger risk – because, much as the diehards idolise the familiar, and long for an endless respawning of the band they first adored, that early work was captivating for being new. Even its perfect facsimile will pale by repetition. Armageddon is a sop to the disaffected fans of FFAF’s pomp, and in seeking to recapture their ardour it tries too hard to pander to their needs. And from the few tracks that evidence what could have been, that’s a shame.

Funeral For A Friend MP3s or CDs

Funeral For A Friend on Spotify