Future Islands – As Long As You Are 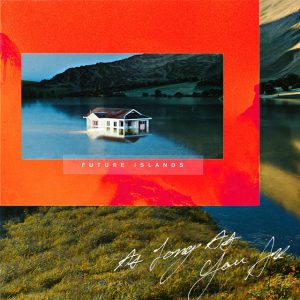 Baltimore heartbreakers Future Islands have been, over the course of the last 14 years, one of the world’s most consistently great indie bands. Their combination of icy synth-pop, muscular new wave and at times, batshit crazy musical theatre sonics, is instantly identifiable and completely unique.

Keyboard maestro Gerrit Welmers, bass/guitar wizard William Cashion and, of course, Samuel T Herring have always operated at the very highest levels of the game, but they spent their first seven-or-so years steadily building a rabid fanbase, before that iconic performance on Letterman made their 2014 album Singles a worldwide concern. Their latest album, the thrilling The Far Field, was released in 2017, and their return can’t have come at a better time. Future Islands are a band we’ve all been crying out for in these awful times, and As Long As You Are is better than it has any right to be. It’s surprisingly good, but surprising in wonderful and haunting ways.

Firstly, and most importantly, this is a dark, dark album; certainly their darkest in a decade. But darkness and Future Islands go together like roses and romance, and their particular darkness means an aching, wondrous desperation, and a willingness to expose yourself to the most intense feelings in order to learn from them. Much like their stylistic forebears and influences Joy Division, The Cure and New Order, the band constantly find new ways to tease out new flavours from their relatively consistent sound.

From the opening track, Glada, it’s clear that the band are out for tears. It again places the band in their comfort zone (watery synths, gasping melodrama), but pushes the listener out into the fringes of their psyche. Another track that pushes those buttons is the exceptional Thrill, which is one of the tracks the band released to preview the record. Like the best Future Islands songs, the band find ways to jab at your feelings like they’re open wounds. I Knew You, with its discomfiting, oppressive synth stabs, is an introspective affair, while the final track Hit The Coast provides the album with a restrained, tasteful conclusion. The overall feel of the album is more wistful, more elegiac than they’ve ever really attempted before, and it pays off massively.

However, for all the darkness, there are moments of sheer heart-bursting light here. Waking in particular is the kind of gilt-edged classic Future Islands feature at least once on every record – it’s this album’s Tin Man, or Seasons (Waiting on You). Cashion’s bass is particularly powerful, and Herring is on imperious form. For Sure is also littered with Herring Moments™.

There are other highlights, of course. A thunderous bass carries Born In A War to stunning heights, while the Disintegration grandeur of Moonlight seems to spread out like wine on a tablecloth, the colour deepening and the scope widening with each passing second. Plastic Beach is brimming with pent-up fury and buried fire, and it spends three and a half minutes burning itself into ashes.

While their best album is (and probably always will be) their 2010 masterpiece In Evening Air, As Long As You Are takes their hot streak to six consecutive albums. This is a more concentrated, more potent collection than their first album, and a more consistent listen than their last, but doesn’t quite hit the highs of In Evening Air or On The Water – but then it never tries to. At this stage of their career, Future Islands have nothing to prove, but they’re constantly trying to better themselves, and provide their listeners with new ways of looking at old feelings. As Long As You Are is an endlessly rewarding listen, and it’s certainly worth the wait, but did you really expect anything else?