Future Islands – On The Water 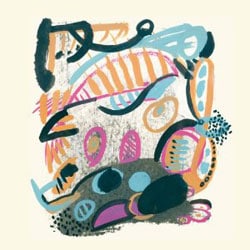 Future Islands return after the briefest of gaps to follow up their acclaimed album In Evening Air. The new work takes their musical aptitude and applies it to a concept – but this is no concept album. Straddling visceral and mellow, they’re onto something once again with On The Water.

The concept’s an interesting one. The album is meant to take the listener on a journey through their memories, evoking emotion by creating songs which are deliberately open-ended enough lyrically to fit anybody’s experiences, and draws ‘aural memories’ by reminding listeners of their own experiences of the greats who’ve influenced this album.

Those influences are certainly laid bare musically. The promo material might list New Order and David Bowie, but the album evokes Crowded House or U2 equally validly. Indeed, there is art to the way Sam Herring and his motley crew go about constructing their creation. There’s something in the octave bells and Herring’s husky growl in Where I Found You which slips the listener right back to the ’90s. Lyrically, to give but one example, the way “I remember a room” becomes “I remember your room” in the next line presumably intentionally mimics the piecemeal nature of the recovery of memory. Elsewhere, the phrase “with or without you” is almost certainly not throwaway, given the sound and feel of the track.

Meanwhile, On The Water provides a plodding, purposive intro, speared through by an arresting vocal entry, whose rhythm and variation of length adds a new dimension to the texture. First single Before The Bridge is almost like looking at the music through the glass in an aquarium, so distant and ethereal is the background hum. Herring sounds a little like a Jack Black parody of his own voice – but that’s not a problem. Quirky, yes, but pretty engaging, offering a flamboyant streak over the busy timbres underneath.

There is space for the truly gripping. Give Us The Wind is nothing short of empowering, if a little crazed in its fanaticism. There’s something slightly unhinged but brilliant in lines like “we set out to find something to hold/ but in seeking truth the answer is the road”. Rollaround rhythms and forward momentum make this an uplifting anthem, not just a dead piece of ‘concept’.

Close To None, on the other hand, takes a little too long to get going. It’s rather weird for the first, inexplicable minute, then the bass and slick drums kick in. Once the rudder’s attached, it’s full steam ahead to a cracking indie anthem in the making.

There’s nothing wrong with this album per se, but it has its limitations. Coming in at just shy of 41 minutes, this is a brief affair, but even in such a short space of time, musical variety is noticeably limited. That said, there’s probably only so much of Herring’s distinctive vocal style to be had before becoming desensitised to its often visceral tug.

Overall, this is a great effort. The concept is realised for the most part, and while some more variety in the ‘musical memories’ might have been nice (along with a little more length), there’s not much to knock in a cracking example of that rare phenomenon – listenable concept art.