Future Of The Left – The Peace And Truce Of… 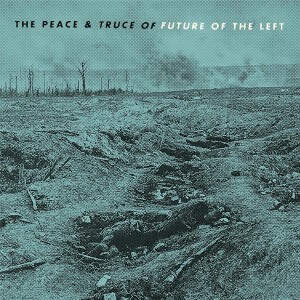 When Future Of The Left first appeared, they seemed to be a somewhat more tuneful, hook laden version of the band that spawned them, Mclusky. Over the years however, FOTL has started to drift into harder and darker territory. Whether crowdfunding their last couple of releases has released them from the shackles of expectation is anyone’s guess (although it’s hard to believe there’s ever been much compromise and restraint where Andy Falkous is concerned), but they’re now a far leaner, meaner and more aggressive proposition than the band that recorded Curses.

There are very few concessions to anything resembling a direct pop-infused hook on any of these songs. The closest they get to anything that might be described as a pleasing harmony comes on the almost catchy sprint of The Limits Of Battleships as Falco is distributing drinks according to his own unique system: pilots get three drinks, none for door staff though – nobody said it was fair. There’s also the bizarre kazoo/handclap hum of 50 Days Before The Hun that manages to burrow its way into the earhole and make a nuisance of itself, but beyond that, this might be the harshest FOTL has ever sounded. This punchy, pointed, and aggressive approach is hardly new for the band, but this is perhaps the first time that they’ve fully committed to it.

Right from the off they’re abrasive and going for the jugular. Introduced with a scree of agitated guitar from Falco, AT&T Drank Tea What Would BP Do quickly hands over to the driving bass of Julia Ruzick and the propulsive drumming of Jack Egglestone. With Future Of The Left albums, the focus is almost always on Falkous, but without Ruzick and Egglestone, they’d be nowhere near as effective. Ruzick’s bass is taut and muscular and provides the centre around which Falkous’ spiky guitar lines circle like seriously pissed off wasps.

As impressive as Ruzick and Egglestone are, it’s Falkous who takes centre stage. With its focus on squall and chaos over harmonies and hooks, the attention eventually settles on the lyrics, which are as usual Future Of The Left’s defining feature. The Peace And Truce finds the band veering toward something that could almost be defined as performance art/poetry with Falkous offering up a series of non-sequiturs and pointed barbs that are finely crafted nuggets of humour, surrealism and hatred. It’s a fine line to tread; go too far one way and it all seems too contrived, stagger off into whimsy and you’re suddenly a joke band. Future Of The Left are not, thankfully, a comedy band, but there is humour in Falkous’ delivery and wordsmithery.

Running All Over The Wicket might just be Falkous’ finest moment to date. Over a thrumming bass line he spits out “If 20 therapists want to tempt me with their tit rings, they should know that I own a werewolf and the sense to use it.” There’s no time to untangle the sense though as the song bundles along into a fantastic bleakly comic scene “A dead body in the boot of a Nova is least of my problems, as long as there is still room for the shopping”.

Back When I Was Brilliant seethes perfectly with its robot rock riffing and tale of attempting to find a decent Thai place for a birthday meal in Hamburg. Proper Music addresses the notion of authenticity in music whilst backed by a Queens Of The Stone Age riff and asking the oft asked question “how many farmers’ markets does it take to change a light bulb”. Miner’s Gruel is the most targeted piece here, telling the story of parents kicking out their entitled daughter whilst also indulging in some quite wonderful word play. It’s when he’s being direct that he’s at his most effective though. Eating For None is a ball of tension that simply revels in the refrain “Add another finger to your English breakfast, you Army Surplus motherfucker”. It might not mean much, but it’s delivered with a pleasing amount of forceful venom.

It might not be FOTL’s most accessible album, but The Peace And Truce is perhaps their most rewarding. Once those rough edges have been understood and accepted, Falkous’ cryptic lyrics are an endless source of mirth and puzzlement. There’s depth here, and it’s not just in Ruzick’s bass lines.