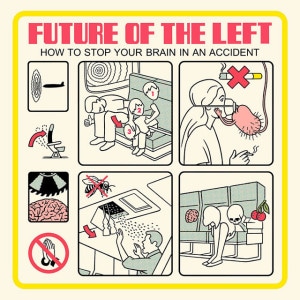 With last year’s great The Plot Against Common Sense, post-mcclusky noise quartet Future Of The Left reached their combined apex of wit and punk. Well, they’ve topped themselves with their latest release, the hilarious How To Stop Your Brain In An Accident. On their new one, Future Of The Left do what they do best. Their Pissed Jeans meets Art Brut aesthetic is as referential and rocking as ever, all the while the band jokes about upward mobility sans the self-seriousness of other bands who do the same.

Indeed, like their fellow post-hardcore rockers Pissed Jeans, Future Of The Left’s songs often focus on notions of masculinity; whether Andy “Falco” Falkous is singing “I’m just a man!” on opener Bread, Cheese, Bow And Arrow or talking about the male gaze on the song of the same title (it’s worth noting that Pissed Jeans have also released a similar song this year called Male Gaze), Falkous isn’t being nice and laughing with anybody. He’s laughing at them, and he’s also laughing at himself. On the opener, he’s poking fun at himself and those sensitive and poetic enough to claim “the loneliness took my ancestors” (because really it was the lions who took them). Moreover, the two minutes of Johnny Borrell Afterlife are just as biting as the title itself, as Falkous’ repetition of “just a boy!” essentially emasculates its title figure.

Musically, the band is sharper than ever, too. The riffs on Future Child Embarrassment Matrix are similar to those of another humorous noise-rock song this year, the talented KEN Mode’s Figure Your Life Out. It’s not that Future Of The Left’s similarities to other bands come across as particularly unoriginal; Falkous and company bring their own sardonic, British spin to a sub-genre that’s occasionally a bit too literal. Instead, Future Of The Left have asserted a certain kinship with Pissed Jeans and KEN Mode, whether or not mcclusky or any other pre-Future Of The Left project were influences on the aforementioned American and Canadian bands.

Most impressively, only four songs in, the most Art Brut-like song and by far the funniest and best song on How To Stop Your Brain In An Accident is Singing Of The Bonesaws, a great companion piece to Art Brut’s untouchable Formed A Band. On this track, a deadpan voice delivers vignettes on the lying music industry, Daniel Day Lewis, Apple, MTV, and science. Words do not do the song justice. At the same time, Future Of The Left can conjure up emotions and the same sensitivity the band seems to make fun of. A case in point is French Lessons, which sees Falkous being mean without being funny. But there’s no choice but to feel sorry for him when he sings: “You could kid yourself that your dreams amount to more than counting backwards from four.”

In sum, How To Stop Your Brain In An Accident cements Future Of The Left as unique. It seems impossible that a band can so consistently produce such output full of lyrical ingenuity, social commentary, and musical quality while retaining a sense of humour. Keeping in mind that songs like Male Gaze and She Gets Passed Around At Parties are tearing down chauvinism through humor and satire, you realise that Future Of The Left aren’t just for either an academic audience, noise fans, or people who think that music has sucked since Pinkerton. They’re a band for anybody who has recognised the absurdity of the world and only wishes to laugh at it.