Future Of The Left – The Plot Against Common Sense 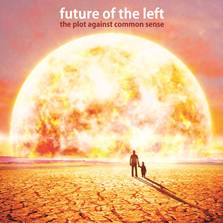 To say that Future Of The Left could have imploded a couple of years ago would be exaggerating a little, but they were in danger of mirroring the demise of Andy Falkous’ former band Mclusky. The departure of Kelson Mathias saw the band reborn as a four-piece (bassist Julia Ruzicka and second guitarist Jimmy Watkins joined the fold) and, following a few shows in 2010 and 2011, they released the Polymers Are Forever EP. All six tracks on that release showed that the growling bite that made them so appealing was still intact and, if anything, was even surer thanks to the increase in numbers.

The Plot Against Common Sense, the band’s third LP, will have something for everyone, whether it’s the tight and direct bursts of rock with memorably shouty phrases, the more sprawling moments that go beyond verse-chorus-verse or Falkous’ witty and at times humorous lyrics. It’s also considerably longer than both Curses and Travels With Myself And Another; whilst they both barely lasted for half an hour, this opus manages to keep going for around 50 minutes.

By their standards this is the quartet at their most exploratory and adventurous. It’s to their credit that Future Of The Left have managed to move their own sound forward without losing any of their own distinct touches that made them one of this country’s most relevant, unique and vital rock bands in the process.

Older fans will find comfort (well, if any of this can be called comforting) in the urgency and stinging commentary of lead single Sheena Is A T-Shirt Salesman and the tenacious This Is The Least Of Your Problems, which pin the listener down and take no prisoners. The hiss and snarl of these tracks is a reminder of why FOTL were such an enticing prospect to begin with.

Yet, whereas the rage was spilling out all over the place on their previous two records, this is a more concentrated effort and the results are incredibly satisfying as a result. Falkous’ lyrics, always striking and satirical, are at their best with quality one-liners coming at you at unrelenting speed. Robocop 4 – Fuck Off Robocop is the standout though for being gloriously snarling at movie franchising (“Pirates of the Caribbean 47/Johnny Depp stars as the robot pirate/Who loses his wife in a game of poker/And tries to win her back with hilarious consequences”) amidst frenetic stop-start guitars and drums.

Their fury can also be channeled into songs that don’t propel themselves at more than a hundred miles an hour and these act as breathers of sorts. Beneath The Waves An Ocean is a bruising slow-burner that is bold and the closest that they’ve gotten in their career to sounding epic. Album closer Notes On Achieving Orbit shares similar intentions and by the end of its last “sha-la-la-la-la-la” hoorah you’re fully immersed in their world of pessimism.

Listening to this album, it’s amazing to think that Future Of The Left was hanging in the balance a couple of years ago. From that brief moment of uncertainty they’ve gone and made the most rewarding album of their career to date. The Plot Against Common Sense laughs in the face of everything absurd about modern life. If you’ve any common sense, plot a listen soon.