Future Of The Left – Travels With Myself And Another 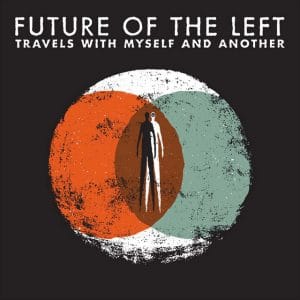 In November 2008, Future Of The Left took the decision to cancel their touring schedule for the rest of the year, and instead retreat to a studio and record their second album. While doing so was obviously against marketing protocol, their need to get the second album out there over-rode everything. Now comes the time for their fans’ initial disappointment to be mitigated.

If such a thing as a musical Atkins diet existed, Andy ‘Falco’ Falkous, Kelson Mathias and Jack Egglestone would be suspected of being on it. For their music is totally shorn of trimmings, as they use their second album as a platform for a remorseless onslaught of searing vocals, cutting guitars and the odd lean synthesizer sound.

This is the music of three angry people. But they don’t fall into the trap so many rock bands of their ilk do by making a shouty, tuneless mess of it. Even when Falco is at his throatiest, there’s still a sharp edged riff right behind him to hammer home the point. And in 12 songs, that clock in at little over half an hour, this point gets made very well.

The apocalyptic song The Hope That House Built is very much of our times, marching forward with black humour and biting guitar comments. “Come join, come join our hopeless cause” sing the marching throng as they process through the gates into oblivion, with even the oft-repeated observation that “In the end, everybody wins” becoming progressively emptier with each airing. You can’t help but think Falco is relying on very cold comforts here.

The guitars on Land Of My Farmers are also fantastically guttural, the tongue seemingly burning a hole in the cheek, and they don’t come much blacker than You Need Satan More Than He Needs You. “It doesn’t look like a man, it doesn’t talk like a man, but does it fuck like a man?” asks a disembodied voice with a chilly undertone. You bet it does – and it’s all realised in horrifying technicolour.

Yet despite the occasionally black subject matter this is a fine and powerful album for lovers of red meat rock, served rare. Few singers make their point as forcefully as Falco does these days, and Future Of The Left deserve plaudits for peeling back the layers to reveal the fire within.