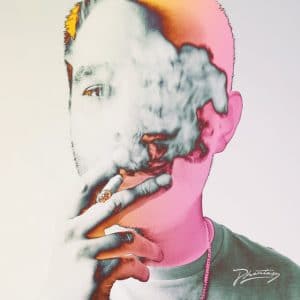 Gabe Gurnsey’s debut solo album is a throwback affair, in which he eschews the intricate polyrhythms of his group Factory Floor in favour of acid house textures. 707, 808 and 909 drum machines alternate with hand percussion and drum kit, as sensual but inessential lyrics evoke Jamie Principle’s appearances on classic Frankie Knuckles tracks.

You Can is an early highlight, with a groovy electric bassline which snakes around the repeated refrain “you can dance while I get high” and syncopated layers of synth that build on top, as is the intense lead single Harder Rhythm. The tracks frequently start with minimal ideas – a looped bassline, a relatively simple drum pattern – and expand on these through the duration, as is the case with I Get and Eyes Over, and while this can sometimes become formulaic it also leads to the album’s best moments.

Beatless interludes bridge between songs, ambient synth excursions that provide an interesting contrast to the highly rhythmic tracks. Night Track is a perfect example of the latter, featuring a bassline of staccato repeated notes that bend woozily up and down, busy hi-hats that count time between a 4×4 kickdrum and cut-up vocals which add to the track’s frenetic energy.

Not every song is vital here: the sound design on Temazzy is cool and all but it passes by without leaving much of an impact, and The Last Channel is a bit underwhelming as the album’s closing track. It probably would have come across better as a slightly leaner offering that was all killer no filler, but at its best Physical develops on his work with Factory Floor to create a distinctive style of his own, an unsettling retro take on house music that yields many fantastic results across the record.