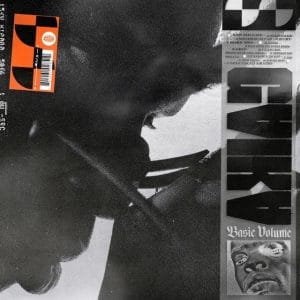 In a time where Caribbean styles are so frequently used in pop music to create a breezy summer vibe, Gaika’s debut album is a novelty. Basic Volume takes dancehall, ragga and trap influences and gives them a cold, icy sheen with help from Dre Skull, Jam City and SOPHIE, the sound similar to some of The Bug’s production.

Gaika’s vocals are slathered in auto-tune and patois, a bleak tone to his voice as he delivers lyrics about street life and race. One of the most effective examples of this is on the opening titular track, where Gaika opines on being “blind and burned / naked and black in a white man’s world” over slowly building synth layers. His delivery here is slow and despondent, but moves into something more resembling toasting on tracks like Black Empire (Killmonger Riddim).

The production is of consistently high quality, ranging from the big trancey synths of lead single Crown & Key to the syncopated hits of raunchy number Grip. Meanwhile the sequencing is smooth and engaging, the album’s relative length justified by the sonic variety and Gaika’s conceptually dense lyrics.

Spectacular Anthem is the final track, with production that contrasts dominant bass and a dynamic melody line with hesitant percussion, one bar of a 4×4 kickdrum and one bar of sparse rimshots alternating throughout the song. The suitably simple hook line sings “it’s OK to learn / it’s OK to try” on one unwavering note that gives the impression of a chant, and as strings build through the track the effect is very powerful as a conclusion to an album that has so much darkness.

Basic Volume is a strong, distinctive debut from a promising artist whose maturity and versatility are already apparent, highly recommended for fans of electronic music and dancehall.