Gallon Drunk – The Soul Of The Hour 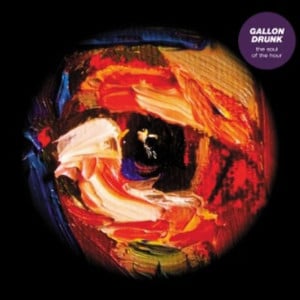 James Johnston’s CV inspires much admiration and a lot of jealousy. He’s collaborated with, been in bands with, and played his ass off for luminaries and icons galore. His reputation as a multi-instrumentalist has seen him, as a member of The Bad Seeds, provide organ and guitar on Nick Cave’s crackling, unhinged masterpiece DIG!!! LAZARUS DIG!!! and organ on his dichotomous, paradoxical masterpiece Abattoir Blues/The Lyre Of Orpheus. He is a member of Jean-Hervé Péron & Zappi Diermaier’s Faust, one of the most revered names in Krautrock. Their collaboration Something Dirty was superior to Hans Irmler’s Faust Is Last album by quite some margin, and Johnston’s heavy involvement in the project was credited as the driving force behind its success.

Johnston’s own project, Gallon Drunk, is where things get yet more interesting. Of late they have operated under the radar and thus away from the scrutiny of mainstream music criticism, allowing them to cement their reputation for expressive, fierce post-punk with caustic records like The Road Gets Darker From Here, In the Long Still Night and Fire Music. The Road Gets Darker From Here, their previous release, is as potent and engaging as any Gallon Drunk record, and certainly as severe as anything in their catalogue.

The Soul Of The Hour finds the listener exposed to haunting brown-acid psychedelia, piercing shrapnel-sharp post-punk that pops the same vein as his mentor’s The Birthday Party, swirling, squalling Krautrock and titanic blues-rock a la Blue Cheer. Johnston obviously has a mean record collection to go with his incredible rep – echoes of The Doors, Can and The Cramps are scattered throughout his vast canon. He is equally able to craft slow-burn and short-fuse tones and moods, and infuse them with sinister vibes or euphoric wig-out moments to impressive effect.

Opener Before The Fire is a spooky Kraut jam on piano and drums, supplemented by cymbal washes and swirling organ sounds. It builds slowly on a tantric groove – slashing guitar chords wrap around the clattering drum kit and intertwine with the woolly organ and bright piano sounds, before Terry Edwards’ stabs of brass give the track an epic, grandiose quality, all the while maintaining a pounding bottom end. It’s a tidy introduction to quite a titanic record, and it only gets heavier from here on out.

The Dumb Room, which follows, is a loose, buzzing groove-r, sounding something like Jon Spencer covering Black Sabbath, only dropping the raunchiness for heft and clout (new member Leo Kurunis’ bass sound here is a treat). The ‘Temple Of Iommi’ riffage is super heavy – an homage to the long-haired, red-eyed riff-warriors of yore. This track highlights that Johnston’s sturm und drang moments are not only comparable to his contemporaries’, but are often superior: Jon Spencer’s last record was great, but this turns the heat up to 11.

The Exit Sign is a glittery stomper that borrows (steals?) Spacemen 3’s fantastic cover of Juicy Lucy’s obscure gem Mary Anne, and adds extra psychedelic bluster (including some Silver Apples keyboard effects). The similarity between the two tracks is undeniable, but seeing as Sound Of Confusion is one of the touchstones of this genre, and seeing as the Spacemen didn’t credit the Stooges for O.D. Catastrophe, one can’t imagine any complaints from Messrs Spaceman or Boom. Hearing Johnston’s reverb-drenched vocals and the metronomic drum line evokes memories of the Spacemen and Loop at their most shamanic.

The Soul Of The Hour is a gleaming, oscillating drone-r that conjures some of the menace and impending gloom that hangs over Loop’s catalogue. Its slower-than-thou drum line allows space for the shimmering guitar effect to take hold, before a maximalist coda enters: all sharp brass hoots and a thick bottom end, like classic Stooges switching stimulants for depressants. Dust In The Light, which follows, is amongst the most strikingly blissful songs of Johnston’s career: a delicate vocal melody and Ian White’s steady percussion drive the track forward through its narcotic haze, similar to that on Planet Caravan or Solitude (both amongst Black Sabbath’s most chilled numbers). Johnston’s voice here is a soft, breathy croon, which enhances the drowsy vibe.

The closing one-two of Over And Over and The Speed Of Fear round the album out in splendid fashion: the former finds Johnston’s yearning, insistent vocal line matched with stoner-rock blurriness while the latter is no doubt the album’s highlight, should you need one. A Liebezeit-esque drum lockdown holds rock steady for the lysergic madness going on above it – squealing guitars and ringing bass, howling vocals and spooky acoustic guitar strums comprise not only the most brutal, but most funkadelic cut of the record. It’s motorik music for the sleepy legion of space cadets out there.

There’s a lot of space, a lot of groove, a lot of clatter on this record. Sonically, it’s the twin of Spacemen 3’s Sound Of Confusion, which recreational marijuana users will need no introduction to. Those same folks should need even less encouragement to put whatever they’re holding in the ashtray, pause Black Dynamite and BUY THIS IMMEDIATELY. J Spacemen hasn’t made a record like this since Pure Phase, and the chance of him releasing another is slimmer than a single-sheeter. And that’s slim.

The press release touted this as the album of Gallon Drunk’s career, and it’s not far wide of the mark. As Johnston’s work with Faust already shows, brilliant records can be made at any stage of an artist’s life, be it their first album or 14th. The Soul Of The Hour is a relentlessly hypnotic, densely psychedelic record with moments of crushing elegance, and others of pure magic. Gallon Drunk are now eight albums in to their storied career, and their strain of narcotic rock is getting more and more potent with age.