Garbage – No Gods No Masters 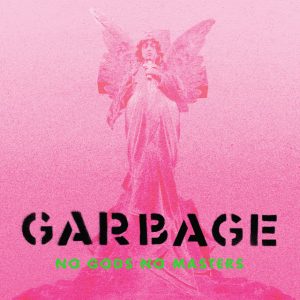 For Garbage’s seventh studio album No Gods No Masters, original fans of a band indelibly borne of the 1990s may be somewhat bemused. Poppy melodies synonymous with the band’s early guise – well, particularly Version 2.0 at least – are largely harder to locate; instead, there’s a darkness here that Gary Numan or Depeche Mode are more renowned for than Shirley Manson and her esteemed bandmates.

It’s not exactly a political record, although many may see it that way; it’s more accurately an album crafted from current affairs including racism and capitalism. One message in particular rears its head and that’s the violence towards black Americans, something that Manson was horrified to find actually was occurring daily, once she stopped to look closely. And Manson’s discovery is all too common – for those that actually do discard the innumerable distractions that many claim to be a purposeful cloak cast over ignorant citizens the world over, the realisation that freedom is not exactly the freedom that people believe they have is all too apparent.

Opener The Men Who Rule The World spells it out for the naïve; through a bombastic barrage, Manson is in full-on mode when she states “The men who rule the world have made a fucking mess”. For those that are not awakened to the true running order of all things, the people that control everything are of course the people that control the monetary system, and with a fruit machine kicking the track off, Garbage are intent on leaving you in no doubt as to what’s going on. A trait of the album is that verses are not always ball-grabbingly impressive, with choruses often making up for this. So it goes with this track, Manson repetitively complaining, “Stuck inside my head, stuck inside my head, all the fucking time,” which will prove to be prophetic words, and “destroy the violator” reveals the overlords’ strategy to deal with anything that threatens their power.

Darkness is on show all over, from the Uncomfortably Me moans of “Always the bridesmaid and never the bride” to the sinister highlight A Woman Destroyed, culminating in closing track This City Will Kill You where Manson’s final words on the record simply state, “Gotta get out”. But the record’s darkest moments sonically are not its biggest draw. For that we focus on a more religious side, where Waiting For God tells of “keeping our fingers crossed” that God will appear to silence the doubters and put an end to the pain the drone state has caused, the admission of “I can’t seem to make sense of all of this madness” clearly seeking help from above in order to understand. Godhead then overcomes its questionable lyrics (“If I had a dick would you blow it”) to deliver a rocking chorus that will be another to stick. For a touch of classic Garbage, though, the buzzy verses and spiky guitar of Wolves will recreate the fuzzy moments of old along with Flipping The Bird, a track firmly created from the New Order mould.

Strange Little Birds from 2016 was a belting return to form for Garbage, and although No Gods No Masters has its moments, it’s not quite at the same level. Mainly written pre-lockdown, it strangely fits the current world probably better than it would have done if released earlier, though; call it prophetic, perhaps, but Garbage have tapped into issues surrounding us all in our daily lives, ones that we can all see if we pull away from our distractions (be it music, sport, TV, video games etc.) to look more closely. Unfortunately, as Manson has admitted, any route out of the continuing downward spiral that we are experiencing – with race issues, climate change and just overall monopolisation of, well, everything by the elite and powerful – will be tough to find. With that in mind, the record feels like a scream in the middle of space a billion light years from Earth.