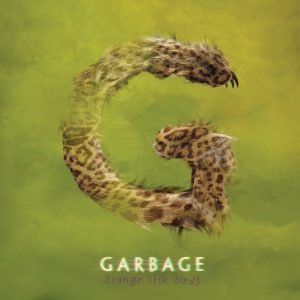 Veteran Debbie downers Garbage are an odd duck at this point in their career. They’re no less the skilled technicians they were in the mid-’90s when they held court over freaks and geeks with garish aplomb, but they face a challenge many fail to overcome as their fans age, balancing that desire to recapture glory days with a need to mature. Everything since the resplendent pop of 2001’s Beautiful Garbage has been navigating that rocky terrain, with mixed results, but on Strange Little Birds the band appear to have a stronger foothold and a clearer line of communication to base camp.

It’s absolutely no surprise that this should follow a tour in support of the 20th anniversary of the band’s iconic debut. It’s not trite replication or pandering, but those who came of age with Garbage and Version 2.0 will find the spectres of those albums pleasing. Moreover, those same listeners might be heartened to find that while Garbage still kindle the flame of the inner teenager, Shirley Manson’s voice now also echoes her ageing audience – the powerful, defiant supervixen is still there, and those 20 years have crystallised the rage and regret to perfection, but there are other worries too. The self-reflection involved in revisiting the past sees her tackling imposter syndrome, as well as the difficulty of trusting that she’s not fated to relive the same dysfunctional relationships.

It’s not a case of veering to the middle of the road after the tumultuous 20s either, and Garbage can still slather on mall goth sexiness like it’s going out of style. Manson’s typically electrifying provocations can fall flat – “got my phone on…vibrate” – but her voice is such that it’s easily overcome, and outright titillation has always played second fiddle to the band’s psychodrama anyway. Strange Little Birds still wallows in the misery that’s often been Garbage’s bread and butter, but here too is mindful serenity and insight. The crunchy anxiety and punchy petulance of early hits seems to have mellowed, and though there are some reliably loud moments the album is overall more expansive, cinematic, even soaring. “Can you love me for what I’ve become?”, asks Manson, the wearied battleborn who’s now weathered two decades of being publicly glum and off-kilter. True to that, much of the album hinges upon abject moodiness rather than the mood swings that propelled the band to fame. It’s less punch-drunk, rewarding close listening and coaxing listeners deeper.

Lying in wait beyond that rich grey veil is the band many missed. Night Drive Loneliness might be peak Manson: dark, haunted displays of sexuality over her boys’ guitars, all underpinned by a ghostly wail that recalls the sadder moments on Beautiful Garbage. Its alienation and isolation, its violent stabs and weird, rueful femme fatale all bring to mind Michel Faber’s Isserley scouring the roads for prey, deadly and woefully lost in her repetitions. That knack for strong imagery with a spooky allure is something Garbage haven’t deployed so well in years.

On Strange Little Birds, Garbage finally pair the potency of their past with where they are now and sidestep self-parody. It’s not a trailblazer, but little can compete with the orange glow of Version 2.0, and to wheel out its mechanical heart again would expose it to rust. The pressure to recreate past glories is greatest when you have a fanbase as devout as Garbage do, but fans are likely to value an honest depiction of the band at 20 more than a pale imitation of the ‘90s. And, development no longer arrested, the band can plumb newer, sadder depths. “I need to understand why we kill the things we love the most,” sings Manson at one point. “Strange little birds devoured by our obsessions.” It’s the truest mission statement yet from a band determined to charge head-on into despair, still strange and doomed and darkly lovely – and coming to terms with it.