Gary Moore – How Blue Can You Get 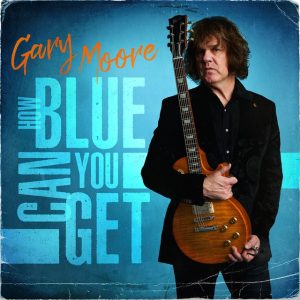 Ten years on from his untimely passing, Gary Moore’s star still burns brightly. With Thin Lizzy getting the box set treatment recently, his role as an integral part of their guitar sound has been appropriately revisited.

Yet Moore’s solo albums still sit in the background, which is a shame because they contain some cracking music, from the chunky, synth-fuelled rock of the late 1980s to cultured blues outings from the 1990s onwards.

How Blue Can You Get provides a timely reminder of just how imaginative a guitarist he could be. Comprising eight tracks lifted from the vaults, it is a victory for quality over quantity, showing Moore’s versatility and sensitivity not just as a guitarist but as lead vocalist too.

The guitar remains the primary instrument, for in his own material or other people’s, Moore had a guitar sound that could not be mistaken for anybody else. His is an economical approach, and there are hardly any instances on this collection where too many notes are used. He makes the silences in between the notes speak just as profoundly too, lovingly crafting longer phrases or punching out quick, decisive riffs.

The guitar is like another voice, finishing his own sentences on the Freddie King cover I’m Tore Down and BB King’s How Blue Can You Get. The former is an extended blues workout with prodigious solo playing, the latter a blend of restraint and virtuosic fretwork. Looking At Your Picture brings a reminder of A Different Beat, Moore’s interesting if uneven excursion into drum and bass from 1999. Breakbeats crackle in the background, but provide a conflicting energy to the vocal.

It is in the slower music where emotions are heightened. In My Dreams has vivid parallels with Parisienne Walkways, the 1979 epic co-written with Thin Lizzy vocalist Phil Lynott. Moore’s voice cracks with emotion, closely aligning with the outpouring we get from the guitar. Love Can Make A Fool Of You also has an impassioned vocal, its heartfelt complaint running deep throughout the song. The ending of a relationship is a thread linking several songs, recurring on the final Living With The Blues, where we find Moore “trying to face up to the fact that we’re through”.

There is strength in depth, though. Steppin’ Out has an impressive heft to its riffing, while the title track has the pick of the instrumental solos, perfectly paced and the icing on the cake to a very fine interpretation.

How Blue Can You Get is the ideal example of Gary Moore’s artistry, vocals and guitar playing ideally matched as he communicates with a searching intensity. The collection is ideally structured, a timely and fitting tribute to a much-missed artist which will have you reaching for his solo work all over again.

More on Gary Moore
Gary Moore – How Blue Can You Get
Obituary: Gary Moore