by Ross Horton
published: 21 May 2021 in Album Reviews
Tweet 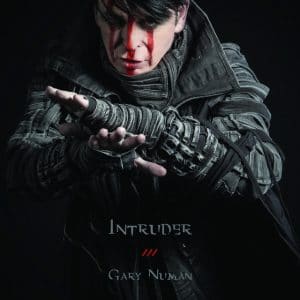 Although he released dodgy albums in 1983, 1985, 1988, 1991 and an absolutely woeful one in 1992 that was barely listenable, Gary Numan‘s long-discussed renaissance has never actually existed: he hasn’t released a less-than-decent album since 1994’s comeback spectacular Sacrifice. Numan, once the leader of Tubeway Army and now the leader of all techno-goths who are too alternative for Depeche Mode, made his name on the back of a handful of iconic songs, and has released more than his fair share of classic albums.

Numan also, most importantly, helped play a part in the birth and eventual dominance of synth-pop in the ’80s, and the fact that he’s been forgiven for supporting Margaret Thatcher throughout that decade should tell you everything about the longevity of the man.

Intruder, which forms a trilogy of sorts with 2013’s Splinter (Songs From A Broken Mind) and 2017’s Savage (Songs From A Broken World), takes his listeners on another deep dive into Numan’s signature darkwave, industrial and trip hop blend, which has grown gradually more aggressive and oppressive over the years, to the point where his music now often resembles the darkest works of his peers (Depeche Mode), or his offspring (Nine Inch Nails).

If you’ve heard and enjoyed anything Numan’s done in the past 30 years, then there’s a good chance you’ll enjoy this record too. Betrayed, with its serpentine vocals and creeping rhythm, offers a clue as to where the album’s going. And lots of these songs have at least one thing going for them, no matter how dour and despondent the overall record is. Saints And Liars is blessed with a soaring chorus, Now And Forever proceeds at a stately pace, and A Black Sun manages to be both menacing and elegant in its construction.

And It Breaks Me Again is a slight misstep, and finds Numan leaning too heavily into the kind of Gen X goth melodrama that made household names out of Korn and Linkin Park. The Gift, which is one of the longer selections on the record, actually seems to be doing a lot with its limited sonic palette, leading the listener through some harrowing orchestral moments and a sinister electronic ambient haze. But Numan’s consistency is also his biggest downfall. There’s simply no reason to listen to Intruder if you’ve heard any of the albums he’s released in the past decade, because it’s virtually identical to his previous works.