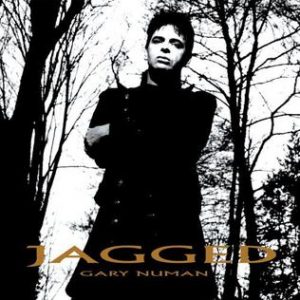 “The thing about Gary Numan is, not only is he a pop star, he’s got a pilot’s license. Imagine that.” So speaks Vince Noir, flamboyant electoboy/girl from The Mighty Boosh. It would appear, then, that Gary Numan’s influence has started to be felt just about everywhere recently.

Not only has he crept into knowing gags in one of the most hip British comedy shows around, he has become cool again. His presence can be felt throughout modern electronica, current pop music, and thanks to the likes of Nine Inch Nails he’s permeated Metal (once a genre that feared the synth more than the thought of cutting its hair).

Interestingly Numan has evidently taken note of his influence, because Jagged takes elements from the current techno scene (notably his co-producer Ade Fenton), as well as borrowing heavily from the goth poppery of Marilyn Manson. If ever there was a case of pop eating itself, then Numan has provided us with a perfect model. The Holy Trinity Of Replicas, Telekon and The Pleasure Principle have created a world populated with devotees as diverse as Basement Jaxx and Front242, and now thanks to a bizarre kind of synthesis he’s using the influence of those he has influenced to create new work.

Jagged, then, is a very dark album indeed. It’s similar in tone to his previous album Pure, certainly, but the involvement of Fenton as a producer has given the whole thing a very full sound. It’s also the sound of a man revisiting his past and reinventing himself all over again.

Jagged leans heavily on the electronic sound of Numan’s past, so if the cold distance you could find in tracks like Me! I Disconnect From You was disconcerting, then Jagged is going to perplex you further. Comparing his current sound to the synths on Replicas, for example, is rather like comparing Terminator to Terminator 2. If Replicas was the future in a Buck Rogers/Barbarella kind of way, then Jagged is a prophesised Android Armageddon, replete with a dark wave industrial metal soundtrack. It’s scary, but the special effects are spellbinding.

Numan’s vocals are superb throughout, still disconnected obviously, but in songs such as In A Dark Place and Haunted he conjures up soaring choruses that fill your head to bursting. Elsewhere, barely audible noises clash with bulldozer guitars, whispered voices speak of isolation but suggest that you are not alone, and bass lines swell and bounce like steel balloons, combining to make Jagged an exhilarating, if at times claustrophobic, experience.

There’s plenty here to keep the Numan faithful happy, and the cyber goth feel to the album should hook plenty of new fans who perhaps thought that Gary Numan was just that bloke that did Cars (and provided Sugababes with a sample). If the litany of small black things that Numan lists in opening tack Pressure (a box, a book filled with lies, a house, a heart – it’s a gothic Generation Game) doesn’t appeal to them, nothing will.