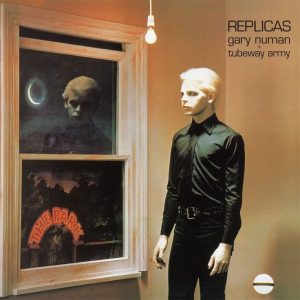 Gary Numan has in this decade finally been getting some of the recognition he so richly deserves. It’s easy to forget just how big Numan and Replicas were in 1979, especially as anyone under the age of 30 now wouldn’t have been born then. But the fact remains that on release Replicas was something of a monster.

Hitting the world with synths and a cold, distant sound, Replicas was direct in its opposition to the guitar roar of punk and the noodling prog that preceded it. The influence of Kraftwerk and David Bowie (check out the riff to The Machman) were to the fore as Numan’s robotic, androgynous persona sent children wailing behind sofas and caused middle England to wonder whether he ‘did it’ with electronics.

Listening to the album now it still sounds fresh and vital. With the likes of Me! I Disconnect From You and Are ‘Friends’ Electric? nestled at the start of the album and Down In The Park drifting in later, Replicas contains many of Numan’s finest moments. There aren’t many albums 30 years old that can still hit the spot.

Replicas’ impact on modern music cannot be understated. It is almost entirely responsible for the Gothic Rock that came from the USA in the shape of Nine Inch Nails and Marilyn Manson, which Numan then reclaimed handsomely on his album Jagged. And it infiltrated the world of pop when Are ‘Friends’ Electric? hit the number one spot again two decades later as a sample that formed the basis of Sugababes‘ Freek Like Me.

The cold, electrical angst that permeates the album predates Radiohead‘s OK Computer by decades, while Numan’s vocal dissociation, mechanical drum patterns and seething keyboards can still be heard resonating in the EBM and Industrial genres. Numan has even managed to make an impact on modern comedy, cropping up in The Mighty Boosh, initially as a knowing joke and then as a resident of a cupboard in the Nabootique.

If album already, there are b-sides and early versions on the second disc of this ‘Redux’ edition. Great for fans, but the casual listener is likely only to give it a few spins before heading back to the original album.

Telekon might be the album of choice for many a Numanoid, but Replicas is where it all started. As such it deserves to be recognised as classic album, and Numan as one of our most original musicians. It’s to be hoped though that he emerges from his repackaging and re-releasing fetish soon to produce new material the equal of it.