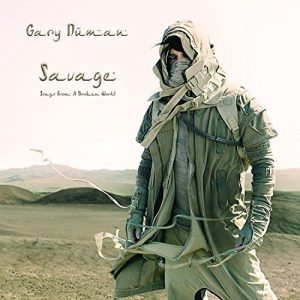 It’s fair to say that, having clocked up over four decades in the music industry, been recognised as a pioneer in the field of electronic music, named as a major influence on the likes of Nine Inch Nails‘ Trent Reznor and Marilyn Manson and even introduced a brand new generation to the magic of Are Friends Electric? via a sample on a Sugababes song, Gary Numan has earned the right to do whatever he wants to do.

And what Numan wants to do is release a concept album set in a dystopian, post-Apocalyptic version of the Middle East that’s been destroyed by environmental neglect, melding a lot of Arabic music influences into his traditional futuristic synth-pop as he does so. In many ways, it feels like a record out of its time, one that won’t sit easily as individual tracks on a Spotify playlist, but you get the feeling that Numan is more than comfortable with this.

A glance at the tracklisting will tell you that this isn’t a particularly cheerful look at the future – Pay For The Pain You Share, My Name Is Ruin and When The World Comes Apart are just three examples of Numan’s mindset right now. However, as doomy as the music can get (and it can become pretty downbeat at times), there’s still a pop sensibility on show that demonstrates exactly why Numan has achieved such longevity.

So, instead of a polemic about the perils of climate change, Numan has constructed these songs into a narrative – one that, as he admits in the liner notes, was inspired by Donald Trump’s decision to withdraw from the Paris Climate Accord. It’s the fact that this terrifying world which Numan sings about could realistically be just around the corner which gives much of Savage its power.

And it does possess a power – it sounds immense for one thing, with long-time producer Ade Fenton creating a heavily industrial sound, full of overlayed, doomy synths and clattering percussions. The mood is set from the start with Ghost Nation’s cries of “We live in a windswept hell, not only God remembers”. The Egyptian influences become to come to the fore in Bed Of Thorns, which closing track Broken builds on even more, although the more successful tracks on Savage have a more crunching industrial feel.

My Name Is Ruin, for example, is by far the most accessible song with a big, bright, almost funky disco feel to it, and the appearance of Numan’s 11 year-old-daughter Persia on backing vocals. While the brooding feel of the rest of the album is certainly present, there’s a verve and vitality to My Name Is Ruin which makes it genuinely exciting.

Which brings us to the main problem with Savage – it’s not really a whole load of fun to listen to. That’s understandable, given the subject matter, but rather like fellow synth superstars Depeche Mode‘s comeback album earlier this year, it all becomes a bit too grim and foreboding over the album’s 55 minute running time. So tracks like the dirge-like Mercy and the military beat of Pray For The Pain You Serve become a bit wearying, and you begin to yearn for just a little bit of light amongst the gloom.

There’s much to admire about Savage, but it’s definitely one that you have to be in a particular mood to enjoy. Long term fans will, of course, lap it up but the more casual observer may feel that the world can be bleak enough without having Savage as its soundtrack.