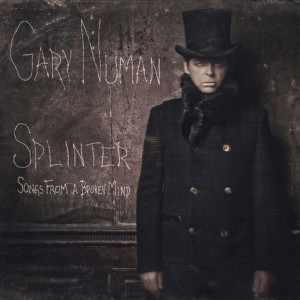 For anyone who remember electropop pioneer Gary Numan solely for the two huge hits in the genre’s infancy – Are Friends Electric?, as Tubeway Army, and Cars – it will come as a surprise to hear that Splinter (Songs From A Broken Mind) joins a list of some 20-odd studio albums released since Tubeway Army began it all in 1978.

With David Bowie hailing the two aforementioned tracks as “a couple of the finest things in British pop,” Numan is no stranger to recognition for his influence and genius from his peers, although this is not often extended to the public beyond his hardcore fan base, with his output largely ignored since 1985’s The Fury. The Pleasure Principle and Replicas remain, of course, his most renowned collections, with the former enjoying a 30th anniversary revisit in 2009 to delight his stalwart supporters with its treasure trove of bonuses.

Numan’s ability as a complete artist should also not be underestimated; from the atmospheric Jack The Ripper like imagery attached to Splinter to the track running order itself, he takes pride in the presentation of his material just as much as the music within. This occasionally leads to moments of style over substance but these seem to appear at stages within tracks rather than dominating tracks completely, as the songs lurch from one direction to another within their own confines. This lack of flow could be a problem for the dancier numbers here; the sudden change in tempo or complete stop could lead to rather awkward, frozen body shapes on the dancefloor – perfect for an adult version of musical statues, mind.

His first release since 2011’s Dead Son Rising – a collection of leftovers the kind of which Numan realised he had previously been unnecessarily discarding throughout his career – Splinter opens with I Am Dust, an excellent industrial synth belter in the vein of recent Depeche Mode, benefiting from one of the most distinct choruses on the entire album. It’s a hard act to follow but Here In The Black does so admirably, again opening to industrial synth sounds before taking on a dramatic synth led passage that sounds both Victorian, in line with the imagery, and futuristic, like something from a Mad Max movie with quickly spoken hushed vocals recalling Yello‘s The Race.

Everything Comes Down To This and The Calling suffer from the style over substance problem a little more than most, with the synth strings of the latter providing the most interest, leading to a more satisfying, cinematic conclusion. The title track’s incessant drum machine pattern leads to one of the few fully flowing numbers, its wailing chorus and Eastern sounding instrumental sections creating more atmosphere than you can shake a stick at.

Lost benefits from a slow, effects-free piano led intro which comes as rather a surprise, before sprawling guitars overloaded with fuzz break up the otherwise serene effort. Album standout Love Hurt Bleeds is a disco-infected number with thunderous instrumental sections permeated by vocal passages, built around a distinctive synth chorus melody and the repeated lyric “everything bleeds”. A Shadow Falls On Me is slower, lurching from indistinct moments to more effects-heavy sections, and Where I Can Never Be continues the slow pace, producing a moment of reflection.

We’re The Unforgiven is more disjointed industrial electro-pop with a futuristic feel and pulsing synth beat that finishes with a thunderous synth/guitar flourish; Who Are You then ups the tempo with its screeching effects sections before succumbing to more of those sudden stops, its chorus being another of the more memorable efforts. Album closer My Last Day is a soft ballad that serves as an orchestral soother after the occasional aggression that has gone before.

Without doubt, Splinter underlines that Gary Numan remains a relevant artist. Robin Finck’s presence on guitar, in common with much of Numan’s work over the last decade, has given the music a Nine Inch Nails feel at times (Numan and Trent Reznor are mutual fans), but this enhances the industrial sounds Numan is renowned for and helps propel his sound into the future once again, with a distinctly dark feel. It adds up to one of his most vital offerings since those heady days of old.