by Jenni Cole
published: 7 May 2007 in Album Reviews
Tweet 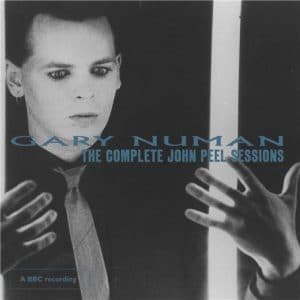 Maida Vale Records is a new imprint from Cooking Vinyl which will be “digging deep into various radio stations’ vaults for interesting live sessions and concert audio”. In other words, dredging up the kind of rarities usually consigned to Nirvana box sets and the latest collection of previously unreleased Beatles tracks because someone, usually quite rightly, thought there was a better use for vinyl at the time they were originally recorded.

Still, if you’re a Numanoid – and there are still plenty of them around – or even just Gary Numan-curious, The Complete John Peel Sessions is a decent enough package. Representing three sessions from the John Peel show, two of which were recorded and broadcast in 1979, either side of the release of Replicas, the classic second album from Tubeway Army (more Numan’s original nom de guerre than a band in the true sense), with the third coming from just into the following century, it does provide a good reminder of, or introduction to, how innovative his music was at the time and how much of an influence it has had on several modern bands.

The bridge between past and present is emphasised by the tracks that appear more than once, providing us with 1979 and 2001 versions of his best known song, Cars, and the less instantly recognisable Down In The Park. By its very nature – it’s taken from three sessions recorded 22 years apart – it’s rather unbalanced as a greatest hits collection or a sampler of his entire career, as all 14 songs come from just three of more than 20 studio albums: three from Replicas, five from 1979’s Pleasure Principle, officially his first solo album, and the rest from 2000’s Pure, with nothing representing his work from before, between or after.

With most of the 1979 material already available on a previous release of Numan’s Peel Sessions, one can’t help but wonder what the ultimate point of this recording is. Being cynical, it’s probably that the 2001 session has never been commercially available before and on their own the tracks available weren’t enough to fill an entire disc. In which case, they may have been better packaged at the beginning of the disc with the older material as ‘bonuses’.

Nonetheless, the package does offer an introduction to Numan’s dark electronica for those discovering his back catalogue through a love of Atari Teenage Riot, Nine Inch Nails, more recent bands such as Editors and Interpol or even – though less likely – Sugababes, who used Are Friends Electric, one of his songs not represented here, as the backbone of their 2002 hit Freak Like Me.

Tracks like I Nearly Married A Human (for anyone who doesn’t know, he actually married one of his fan club) deserve to be rediscovered by a new generation, and the shift from the 1970s to the 2000s doesn’t jar anywhere near as much here as it might on a package from other survivors across a similar timeframe. All in all a curio, rather than a necessity, but a good one nonetheless.