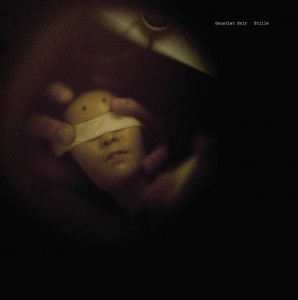 Noise-pop duo Gauntlet Hair (Andy R and Craig Nice) released their debut (eponymous) album in 2011 and received considerable praise for their efforts; now, some two years later the notoriously ‘difficult second album’ is upon us.

Stills marks a change of direction for the band; whereas Gauntlet Hair focused on post-punk guitars and ‘80s electronic rhythms, the new offering tends to create mayhem with every turn, often appearing to lack direction and cohesion as well as genre categorisation in the process.

Human Nature opens the album and contradicts the overall feel of the album. Beginning with a subtle beat accompanied by low-toned grunts the intro bears similarities to Aboriginal music and after 30 seconds you half expect Crocodile Dundee to leap out of the shadows; thankfully, instead, the track bursts into life with tinny drum bursts, squalling shoegaze guitar noise and an incessant beat – perfectly guided along by Andy R’s monotone vocals. It’s an impressive opening, the track culminating in a cacophony of noise along the lines of early Jesus And Mary Chain.

Spew sounds like a mish-mash of noise, but still remains focused, driven by an underpinning bassline and chugging percussion. Vocals are distorted and recall Jason Hill on some of supergroup Vicky Cryer’s The Synthetic Love Of Emotional Engineering.

Simple is where things start to deviate – a lot; the track struggles to flow, which of course is probably the intention. However, the ingredients of grunty bass, sporadic synths, uninspiring vocal melodies and unmemorable guitar riffs encourages boredom.

Bad Apple is the second single lifted from the album – Human Nature being the first. The track opens to industrial percussion and softly sung vocals that weave in and out of the whole song, marrying with the atmospheric synths, industrial noise and reverb guitars – all very interesting and appealing lo-fi that leads to a neat outro benefitting from a moody piano riff.

The swirling psychedelic interjections adorning New To It do little to lift a track that seems bereft of melodies and direction; instead, the result merely serves as a short, dreamy, drugged-up interlude. More industrial noise opens Obey Me, a muddy, distorted piano takes over but the track goes nowhere once again and is over in a flash of irrelevance. The pace increases for Heave, distorted jagged guitar and thunderous drums along with synth effects do their best to elevate the track but ultimately there is little in the way of anything to hold interest, really.

The debut album drew comparisons with Animal Collective but it is hard to pin down the style of the latest offering simply because it never settles; industrial noise is abundant, as are often overbearing drum machine clatterings that generally do little to justify their own existence.

“You are the one, the one I want” states Andy R on G.I.D. but apart from a soaring, falling chorus of hums there isn’t anything here to convince anyone that they are wanted. If anything, the ‘cool’ sounds the band seems to focus on are the only whiff of possible longevity in the track’s destiny – or the album as a whole for that matter. All too often they sound kind of interesting but never deliver.

Falling Out “of love with you” is dreadfully uninspiring; built around dreamy distorted vocals again, the up tempo beat is accompanied by swirling industrial synth noise but is a truly awful waste of space. Album closer Waste Your Art continues the trend – mind bogglingly confusing as to what purpose the track is trying to achieve as it lacks, well, everything that a good song requires, really, apart from the ‘cool’ sounds again. There is no real structure to the song and by this time the album is grating like a tight-fitting metal G-string on a Sumo wrestler.

At only 31 minutes long, there is absolute bewilderment at how varied the output on Stills can be; it’s an exhausting listen in general, with the singles standing head and shoulders above the rest and it is head-scratchingly confusing how a band can be intriguing and beguiling one minute and then downright irritating the next. Deciding upon a settled direction would appear to be the order of the day.