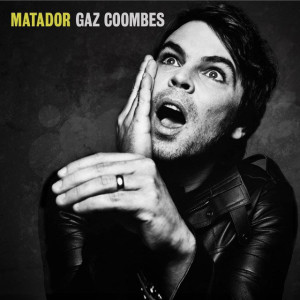 “It’s good to look around and see what else I might have missed. Inspirations change over the years.”

These were the words of Gaz Coombes when he was interviewed on musicOMH around the time of release of Here Come The Bombs, his first solo album since the amicable split of Supergrass. Now that record is incredibly nearly three years old – and here is Coombes with its follow-up, full of fresh ideas and inspirations. The signs are he has indeed been looking around, and that he continues to relish life as a solo artist.

What immediately strikes home on listening to Matador is its self-assurance, a confidence that never gets misplaced into arrogance. You can hear it in Coombes’ powerful but versatile vocals, and in the natural but wholly affirmative directions the music takes. He is more adventurous still where rhythm, harmony and instrumentation are concerned, and this record channels inspiration from sources as diverse as George Harrison, 13th Floor Elevators even, and Neu!. Don’t worry about the almost mandatory Krautrock reference, though – not for Coombes the chugging rhythm a lot of artists use to make them current; instead he uses it to generate a natural head rush through The English Ruse.

Not only is the music a step forward, the songs are too – and Coombes revels in their delivery. The single 20/20 is a slowly building epic, while The English Ruse – great title – is more directly uplifting. Detroit is even better, beautifully sung and winningly presented. Coombes has clearly put a lot of thought into this album, but the structure remains instinctive, so that after the natural highs of 20/20 and The English Ruse we get the gentle comedown of The Girl Who Fell To Earth, ‘blinded by computer love’.

Lyrically this is a record of firm beliefs and proud statements. Needles Eye offers strength in depth, Coombes singing “let’s stay together through the fire, don’t let nothing tear us apart”, while 20/20 has the assurance that “I’ll take the hurricane for you”. Later on he dips into Biblical imagery, singing “Let’s walk down to Jericho, share a little smoke” in Seven Walls, before declaring “I wanna cut myself down before it’s too late, I wanna touch solid ground” in To The Wire.

This song glimpses a darker, more experimental side, but builds strongly through massive choral accompaniment and full band. At this point the album nearly collapses under its own weight, resulting in a strange coda of two very short numbers, the inconsequential Is It On and the title track, where Coombes wraps up with another promise of protection. “I’ll take all the pain and the scars of war, cos I’ll face the beast and fight like a matador”. And fight to the end he does, completing a majestic second album.

Who of Gaz Coombes’ Britpop contemporaries are continuing to grow in stature like this? Surely only a handful. He will be 40 next year, but the signs are that even now, after two decades of pop music, Gaz Coombes is hitting his richest vein of form.