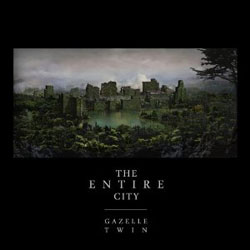 The tendrils of Dark Wave continue to crawl their way into the contemporary scene, the likes of Björk, Fever Ray and, more recently, Austra channelling the shady synth neuroses of Depeche Mode, Japan et al for their own nefarious purposes and into albums yet to reveal notable flaws.

Adopting a mode of moody futurism, though, is no guarantee of plaudits, particularly for debuting acts. Is it sufficient to cast yourself as a mere component of a movement – albeit a seemingly unstoppable one – when striking out for the first time?

For Gazelle Twin – the stage name of Elizabeth Walling – the question is a pertinent one. For all the anticipatory acclaim thrown in The Entire City’s direction, it is a product of its influences; influences worn proudly throughout an album built on an avant garde foundation of minimalist artistry and stark melancholia.

Indeed, it is with the aforementioned Austra that the most telling parallels can be drawn – understated yet relentless percussion, seemingly simple passages layered with striking effects, vocal harmonies expressing what cannot be otherwise articulated, though Gazelle Twin is perhaps slightly more sinister affair.

The opening titular track, for example, sallies forth an electro-orchestral pounding that, though bolstered with beautiful chorals, errs on the industrial side; its brass careering headlong into claustrophobic tunnels rather than over-elaborating. Though somewhat underwrought, it is captivating.

Claustrophobia, in fact, appears to be a constituent theme in an album that casts the city as home, prison, comfort and threat, and paints airwaves like the cold, brooding yet human soundtrack of anime dystopia. Concrete Mother sculpts urban refuge through ethereal drones, leisurely, with Wild Beasts-style vocals and a haunting crescendo – all very 10,000Hz Legend – while Men Like Gods evokes simmering paranoia with its minor chord sorties, indiscernibly distorted sentiments and arm’s length address.

The effect, however, is one of intrigue rather than alienation as Walling continues her portrayal. Far From Home’s operatic instrumental dexterously interprets inner-city discomforts before languid, elegant debut single Changelings envelops its audience in nourishing liquor amnii; Bell Tower stands as conduit to the disconcerting beauty of Gregorian chanting while Nest’s stop-start digitalism provides the plain canvas on which Walling excels, her stirring timbre evoking the intimate elusiveness of Janelle Monáe‘s Cindi Mayweather.

Of course, The Entire City is no ArchAndroid, but neither is it meant to be: though switching between interpretations of future imperfect metropolises, Gazelle Twin’s aural formula varies little as Walling extrapolates her creation with the deft-handedness of a veteran. It is to her credit that her first LP forsakes attention-seeking gimmickry or cheap tricks, and instead sticks to its guns for the duration; an effort reflecting unswerving faith in her vision.

And it is this faith that pays dividends, because The Entire City is quite remarkable. An evocative opus in and of itself – though some may use its single-mindedness as the stick to beat it with – it lights up Gazelle Twin as a name to watch. Stirring and striking.