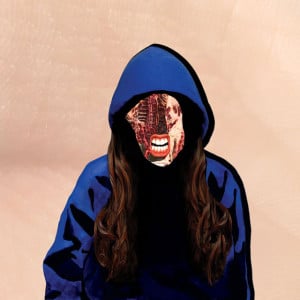 Elizabeth Bernholz’s second album as Gazelle Twin is predominantly about stripping away absolutely everything in order to discover some kind of truth. The whole album is a back to bones process. Musically, everything has been put through a kind of sonic-reducer.

In part this was done with live performance in mind, but the upshot of the approach is that this collection of songs is uncluttered, precise and all the more effective for their streamlined nature. If further clarification is needed, the artwork meanwhile features Bernholz in a hoody with her features stripped away, her face fixed in a leering grimace, not unlike that of Giger’s Alien. The message is clear, there’s a dangerous and raw animal under the skin.

If there’s a tone to the album it is one of unsettling horror. The simplicity of John Carpenter’s film scores is often alluded to, the unrelenting shuffle of Romero’s zombies can be heard groaning in the background, and at the heart of Unflesh is Cronenberg’s unflinching body horror. It is the body that most concerns Bernholz and throughout the album she attempts to make sense of subjects like end of life care (Good Death), self-harm, altered states, and body dysmorphia.

The electronic nature of her music suggests some form of detachment from the human condition, which actually serves these songs rather well. Anti-Body takes suicidal thoughts and self-harm rituals and lays bare what they can feel like; pre-programmed self-destruct commands coming from an alien consciousness. The repetitive beats guide the vocal delivery, insisting that this disturbing and unsettling story plays out in an almost entirely non-human way. Bernholz’s presence treads the line between acceptance and anger, a state of consciousness that seems entirely applicable to the situations being played out.

Gazelle Twin’s strength lies in being able to portray human states of mind by using electronic means. The title track for example is intended to represent panic attacks. Its unsettling bass and clanking apocalyptic percussion are a fairly accurate depiction of the fight or flight sensation; Bernholz repeating “it’s come to get me” completes the picture. At the other end of the spectrum is Premonition, a remarkably delicate and light song that combines gentle synths and vocals to create a lullaby. Dig deeper and it is a meditation on the fears of miscarriage and the loss of a child. To approach such an emotive and upsetting subject and deal with it with such calm eloquence speaks volumes of Bernholz’s skill as an artist.

Unflesh is most certainly a dark album, but there is still room for an occasional concession to the dancefloor. GUTS a song dealing with altered states bought about by fever is a lurching stomp that shakes it out on the way to the nearest sick bucket. Belly Of The Beast shines a hyper real light on the experience of supermarket shopping. The combination of a till beep, hordes of wailing voices and a synth roll that is bordering on the feral turns the most mundane experience into something utterly terrifying and yet danceable.

The closing track Still Life could easily pass as the work of Throbbing Gristle, with its industrial percussion and ominous bass pulses creating a creeping sense of unease. Yet, there’s a positive narrative at work underneath the song’s pulsing flesh. Bernholz’s vocals are nearly buried under the weight of electronic chaos, but it’s possible to hear her talking about shedding dead skin and battling with demons. The addition of a male voice on this song adds a sense of gender confusion to proceedings, but essentially this is a song about moving on, and becoming comfortable within one’s own skin.

Unflesh is at times a disturbing and upsetting listen, but it is also a triumph of will over circumstance. It is an album that might offer some relief to those affected by the subjects it covers, but it also points the way forward. Sometimes, the only way to create is to destroy and start again.