Genesis Owusu – Smiling With No Teeth 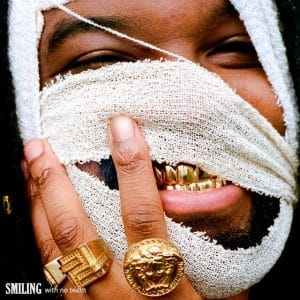 Australian rap may not have broken into the mainstream just yet, but if his debut album is anything to go by, Genesis Owusu may well be the man to make it so. Born in Ghana and raised in Canberra since the age of two, Owusu describes his style as 21st century punk-jazz, but in reality this is an album unlike any you’ll hear all year.

Smiling With No Teeth may have nods to Prince, Outkast, Kanye West and Kendrick Lamar in its style, but in reality, this is truly genre-crossing stuff. From the pulsing, clattering opener of On The Move right up to the soulful, otherworldly vibe of the appropriately titled closing track Bye Bye, this is an album packed with imagination and energy.

The figure of a black dog looms throughout the album, but this isn’t just used as the usual metaphor for depression. Owusu has talked about how he’s been called a “black dog” in the past as a racial slur, and it’s the fury produced by that which drives a lot of the album. So, Black Dogs! has the same sort of simmering energy that M.I.A.‘s Born Free had in spades, Drown speeds along at a head-spinning intensity and Whip Cracker’s guitars almost burn through the speakers if played loud.

Nearly an hour of this would be an exhausting listen though and Owusu balances the sound and fury with some real pop sensibility. The summery stomp of kiss-off song Don’t Need You is the most obvious crossover moment, while Easy appropriates the sleek synth-pop of The Weeknd to glorious effect. Owusu’s delivery swings between a Frank Ocean croon and the slick flow of Childish Gambino. Now and again, on tracks like Black Dogs!, there are clear nods to the Return To Cookie Mountain era of TV On The Radio. Yet Owusu’s personality is so clear on this debut, that he never lets his influences overwhelm him.

He also has the confidence to completely change tack during the album, so in between the energetic, clattering anthems pops up a track simply entitled A Song About Fishing: an appropriately titled laid-back number about angling (“Rise and shine to dawn I wake, to cast my net in a fishless lake”), more pop-folk than furious rapping. Centrefold plays with key changes and vocal effects, while the title track is low-key with a whispered vocal. Some of the stylistic changes could make you dizzy.

The more immediate tracks make the most impression, but if you live with this album for long enough, the more subtle moments have a similar impact. The shuffling funk of I Don’t See Colour has some pointed lyrics about racism – “When I talk about slavery, you weren’t there, how convenient… your image wasn’t up for grabs in this agreement, because somehow your actions represent a whole race” – while No Looking Back’s retro-soul sheen showcases Owusu’s voice beautifully.

It’s an album that’s easy to feel intimidated by at first listen, due to its sheer scale and ambition. However, after a few listens you’ll be in no doubt that Genesis Owusu is one of the most exciting names of the year.