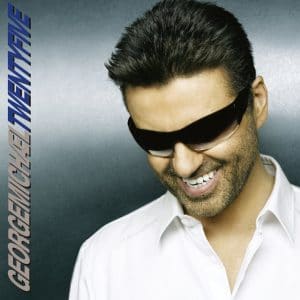 The 40+ plus tracks chosen to chronicle the quarter-century anniversary of George Michael‘s explosion onto the music scene includes solo material, duets and Wham! classics tracing a career that may not always have run smoothly but has been remarkably consistent.

Anyone who has managed 25 years in the music industry deserves some credit and respect (even if they’re Cliff Richard) and someone who has managed it while maintaining integrity and dignity against sometimes impossible odds deserves it even more. Whether you love George or hate him, you can’t deny that he’s done it his way, from shoving shuttlecocks down his impossibly tight shorts, to standing up against the might of the major labels, to responding to being caught with his trousers down in a public toilet by recording a video that takes a look The Village People introduced to the world and makes it more gay than they could possibly have imagined. George really is in a class of his own.

Twentyfive is broken down into three discs, the first of which – For Living – is the dancier, more upbeat of the trio, containing Wham! chartbusters such as Wake Me Up Before You Go-Go and Freedom (the original and the remix), songs such as Faith and Outside that the whole world knows and newbie An Easier Affair. It’s the appearance of the album’s first new track that the cements the idea that Michael is not so much timeless as stuck somewhere at the end of the ’80s, in a designer-stubble, white shirt and stonewashed jeans utopia. Did he really get so focussed on trying to escape from Sony that he forgot to notice that the rest of the world was moving on? But guess what: nobody minded, and many of them were more than happy that once he did start making music again it sounded exactly like the music he had made before and he has continued to make music that sounds pretty much exactly the same ever since. Grunge? Britpop? Oasis? New rave? Every single one of them is beneath his notice. Take George or leave him, you can’t accuse him of compromising himself for anyone.

For Loving, the second disc, is more ballady, containing last-slow-dance-at-the-wedding songs aplenty, from his first solo outings Careless Whisper and A Different Corner to duets with (in case you were in any doubt that this man is music royalty) Paul McCartney, Elton John and ex-Sugababe Mutya. He’s got such an astounding back catalogue that there isn’t even room for I Knew You Were Waiting, his 1987 duet with soul legend Aretha Franklin. His material may at times come across as so sincere it’s painful – yes, Jesus To A Child, we’re looking at you – but there is never any doubt that it is sincere and this is what saves George Michael, time and time again, from becoming a parody of himself. Except on Outside, of course, when he parodies himself so well he leaves you without any doubt whatsoever that his sense of humour is as big as the bulge in the front of his jeans. Don’t Let The Sun Go Down On Me, first performed with Elton John at Live Aid and released to the public in 1991 – the version included here – is just one highlight amongst many.

And then there’s the final disc, For The Loyal, containing B-sides, rarities and curiosities from his frankly somewhat disturbing lounge reinvention of the Police‘s Roxanne, to the live version of Brother Can You Spare A Dime? from the Pavarotti And Friends charity gig. There’s also Please Send Me Someone (Anselmo’s Song), his tribute to his first love who died of AIDS. The sole Wham! track for the loyal is, ironically, the Isley Brothers cover If You Were There which, in many ways, sums up his career perfectly. I saw Wham! live once, at the NEC in Birmingham in 1985. It was an incredible concert, filled with songs I knew word by word then and probably still do and it seems beyond belief that there would be 23 years and all but a handful of the songs on this compilation still to come. Listening now to the timeless line “If you were there you’d know” … well, I was and I do and I haven’t forgotten. A fitting tribute to one of the UK’s truly great performers.