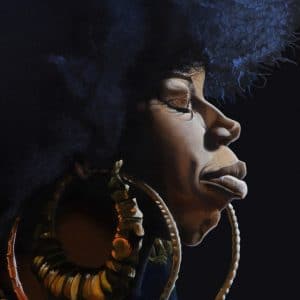 Georgia Anne Muldrow has been carving out her niche in alternative R&B for over a decade, and her newest release combines her signature sound with a production style more mainstream than anything on Seeds or A Thoughtiverse Unmarred.

The title track incorporates a smooth chord progression and bass-heavy trap production, as Muldrow waxes lyrical about her love (“I’m on overload, in overdrive / I’m overwhelmed and overexcited / I’ve got that lifetime crush just for you”). The record is dominated by a happy relationship, whether it be the punchy peptalk of Play It Up or the infatuation of swing duet These Are The Things I Really Like About You with her partner Dudley Perkins.

Her laidback delivery fits surprisingly well with the sleek instrumentation provided by Mike & Keys and DJ Khalil, but Muldrow also gets in touch with her more jazzy roots further into the album with tracks like Bobbie’s Dittie. The track is restless, shifting from groove to groove and flitting between ideas for its duration, her stacked vocal harmonies the only constant. It makes for a varied record, especially as the shorter tracks drift by with interesting tangents that fizzle out just as they get going.

The moody G-funk vibes of Blam set the scene for a more political track, promoting self-defence and the 2nd amendment at a time when many African-American people feel powerless without it. It’s a controversial stance, one that rapper Killer Mike came under fire for taking earlier this year, but she carries it off well with a message of solidarity and a Last Poets-style chanted outro.

Overload contains multitudes, and at times its lack of cohesion can be a bit unsettling. But it is also proof that Muldrow can excel at whatever style she touches on, and a great collection of songs.