Album Of The Week

by Martyn Young
published: 10 Jan 2020 in Album Of The Week, Album Reviews
Tweet 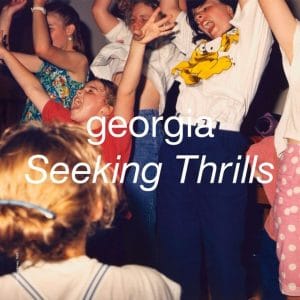 There are many reasons why we listen to music. You might like to have something on in the background as you casually go about your everyday life. You might like to wallow in beautiful sadness. Or perhaps you’d prefer to experience something that transcends your listening and takes you to an altogether different, exalted state of consciousness. It’s this latter feeling of blissful ecstasy that Georgia perfectly encapsulates on her aptly named second album Seeking Thrills.

The record is an odyssey of dancefloor exploration and the primal emotions and desires that the holy epicentre of club life fosters. Georgia herself is the ideal guide for this journey – a producer and writer who intrinsically understands the power of electronic music and how, when harnessed with some glorious pop melodies, the sound is one of deep rapture and emotion.

It’s been a long time since her well received self-titled debut album in 2015 and anticipation for the follow up has been heightened by a string of pure pop bangers that all appear here. While the debut was lo-fi and ever so slightly hesitant, Seeking Thrills is bursting with confidence and makes for a significant step up.

The sound is bold and bright, those aforementioned singles About Work The Dancefloor, Starting Out and 24 Hours glisten with a glorious electro shimmer just perfectly tempered by Georgia’s endearingly imperfect vocal. It’s a compelling balance between polish and distorted bedroom experimentalism.

The record is built from Georgia’s love of dance music in its earliest forms. Chicago house beats influence many of the songs here from the pulsing wobble synth beat of Starting Out to the beatific splendour of The Thrill. There’s also some idiosyncratic British influences at work. You can hear echoes of Depeche Mode and how they created a distinctly British fusion of electronics combined with a dark sense of mystery. The beauty of Depeche’s music lies in the electronics working in harness with Martin Gore’s masterful melodies, and the same thing is at work with Georgia. Here is distinctly a collection of songs; the sound is frequently thrilling and invigorating, but the real joy is in the rich imagery and melancholy of her lyrics. The dance floor can also be a lonely place; Georgia recognises that, and a yearning to recapture that fleeting moment of ecstasy is a recurrent theme on the album.

The record takes influence from the past but also has an eye firmly pointed at the future. There are no boundaries to Georgia’s music and the album finds her gleefully leaping across different styles, from the dub reggae M.I.A.-infused Ray Guns to the plaintive Kate Bush-like dreamscape of Ultimate Sailor.

The experiences Georgia illuminates on the album are of communities, of coming together to take part in a shared experience. These are experiences Georgia herself is well versed in, having grew up in the culture of rave music and communal celebration in the nineties with father Neil Barnes of acclaimed dance act Leftfield. She harnesses that spirit for the uncertain times of this era by recognising that we’re all on our own journey and the opportunities are there for us to do something different and seek our own thrills. The pioneering DJs and producers of Chicago and Detroit in the ’80s who so inspired her came together to break down preconceived notions of how things should be, and their bravery and spirit is the same as the fearlessness that runs through Georgia’s music. The first great album of a new decade is one that promises to inspire a new generation of clubbers and hedonists with the joy of some of the most perfect pop you could ever hope to hear.