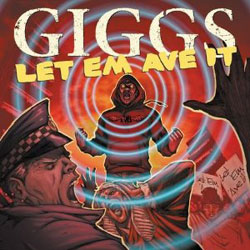 Whilst most of the UK hip-hop that makes the charts seems to hinge on which girlband singer was available to sing the hook, Giggs, aka Hollowman (or plain old Nathan Thompson), delivers tales from the streets of Peckham. Having served a two year jail sentence for gun crime – which has since prevented him from playing gigs in the UK – he was faced with a decision: “Deal drugs, rob or rap”. Let ‘Em ‘Ave It, his debut proper (following a hugely successful mixtape, Walk In Da Park), is unflinching, eschewing commercial concerns for telling it like it is.

And background research isn’t even necessary; his recent past is spelt out perfectly on Intro. Over speaker rumbling beats, chunky guitar riffs and Giggs’ deep rumble of a voice, he goes through the past few years in detail; from his emergence from prison, to not being played on the radio, to signing with the independent label XL. It’s an oddly disconcerting opener, like the preface to a book that gives away too much information.

It also highlights a problem that the album can’t really overcome; for all the bluster and posturing, much of Giggs’ rhymes are fairly weak. True, his slow delivery renders nearly everything he says almost comical, but too often his verses just peter out. There’s very little clever wordplay or variety and sometimes it’s too easy to let the words wash over you, which was clearly not the aim.

Thankfully, the music makes up for any lyrical shortcomings and helps create the feel of the album. The beats may be tinny and rely a bit too much on that basic clap sound made popular on Lil Wayne‘s A Milli, but it benefits from the lack of sheen. Hustle On rides a looped vocal sample before throwing in some spooky synths, whilst highlight Matic is a delirious concoction, mixing scattershot beats with cascading keyboard lines. Recent single Look What The Cat Dragged In is perhaps the only concession to radio playlists (it has an instantly infectious chorus) but even that is littered with crude sex references.

It also manages to pull off that difficult balance between tender tribute to child and mawkish sentimentality on Little Man And Me. Not that Giggs was ever in danger of being too sickly sweet: “Let me take you back quite a bit / When he was first born and I used to wipe his shit”. With a chorus featuring a conversation between father and son (“What you talking about daddy? / Is this like the song talking about nannie?”), it shows Giggs to be less one dimensional than most of his US counterparts.

Giggs’ flow is an acquired taste and the production pays little or no thought to the current trend of adding dayglo synth riffs to very hip-hop single, and yet there’s something unique about this South Londoner. Let ‘Em ‘Ave It isn’t going to appeal to all rap fans, let alone the music buying public at large, but what it does do is introduce a major new talent to UK rap.