Gillian Welch – The Harrow & The Harvest 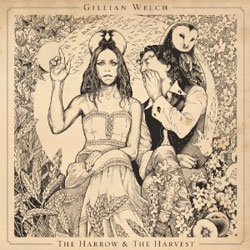 If a week is a long time in politics, then eight years, even by today’s sluggish release cycle, is a very long time in the music business. It’s entirely possible that an artist might be entirely forgotten during such a gestation but, whilst she has been spending time with her family, Gillian Welch’s already near-iconic stock has risen yet further. Her admirers speak of her work in hallowed terms and the recent album by her musical and lifetime partner David Rawlings (ostensibly very similar with the balance of the vocal harmonies reversed) failed to satiate her fans’ anticipation. The Harrow & The Harvest therefore arrives facing very lofty expectations. It succeeds in meeting them in the most relaxed and confident way possible – by simply restating Welch and Rawlings’ core musical values with everything extraneous rigorously removed.

This is one of the most defiantly traditional, non-radical and deceptively simple albums in recent memory. It is far closer in spirit to Welch’s breakthrough Time (The Revelator) than its immediate predecessor, the comparably expansive Soul Journey. The tentative steps that album made towards a full ensemble sound have not been further developed. Instead, The Harrow & The Harvest is an economical duo album, remarkably clear and pure in both its spirit and its execution. It is extraordinary how spare and subtle this music is. Acoustic guitars are strummed and picked with rare delicacy and discipline. Even the partners’ trademark harmonies, still very much present, seem to have been deployed only where strictly necessary and at a new level of contemplative quiet.

Welch and Rawlings’ great skill here is to produce a set of 10 original songs that sound like folk songs passed through generations. There is a song called Hard Times which not only nods to Hard Times Come Again No More, but with its initial conversation between a man and his mule, harks back to another time and place altogether. There is the persistent influence of the blues, at least filtered through the bluegrass tradition, immediately recognisable on the opener Scarlet Town and very prominent on the rollicking The Way That It Goes. There should be no tricksy concerns about ‘authenticity’ here, given the effortlessness with which Welch and Rawlings command this material. The music may reject virtuosity or flourish, but it is uniquely authoritative.

These pieces are not only stylistically coherent but also thematically consistent. There are three songs where the titles begin with The Way – the aforentioned The Harrow & The Harvest, The Way It Will Be and the wonderfully apposite conclusion provided by The Way The Whole Thing Ends. Welch and Rawlings here establish a folk vernacular that makes these songs sound laced with history but also fresh and evocative in their own right. Welch’s narrator in Dark Turn Of Mind hears “the shadows a-calling” and the chorus of Scarlet Town is an admonition – “look at that deep well, look at that dark day”. There is a recurring strain of stoical, perhaps even gallows humour not always apparent in her earlier work. The Way The Whole Thing Ends is resigned to fate (“that’s the way the corn bread crumbles”), whilst on the exquisite Tennessee, “it’s beef steak while I’m working and whiskey when I’m dry”. On The Way That It Goes, Welch requests “when you lay me down to rest, leave a pistol in my vest”.

Although there is nothing here as patient and long as I Dream A Highway, there are still plenty of Welch’s slowly, gently unfolding narratives. The melodies have a subtlety and patience to match the soft dynamic of the music. Best among these are The Way It Will Be (a longstanding live favourite previously known as Throw Me A Rope) and the majestic, allusive Tennessee. Tennessee is a brilliantly dramatic (but not theatrical) confessional beginning with a stark admission “I kissed you ‘cos I’ve never been an angel” and becoming increasingly candid (“Of all the ways I’ve found to hurt myself, you may be my favourite one of all”).

So minimal and calm is much of The Harrow & The Harves that Six Horses comes as something of a shock. It displays the same studied but honest approach to American folk music that characterises the whole album but adds harmonica and, yes, handclaps! The latter constitute the only concession to the percussion family anywhere on this meticulous album. Yet this is surely the environment in which Welch’s soft but utterly convincing voice most thrives – and this is surely her finest achievement to date, a veritable harvest indeed.