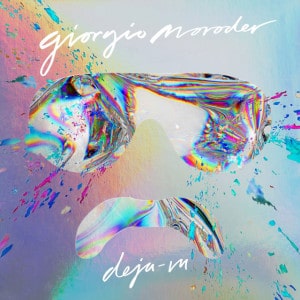 We have classic rock and pop radio stations freely available to digital listeners. So why no room for classic electro? Why should a form of music now longer than 40 years in existence be denied its own platform in this way?

Should Classic Electro – ‘Switched On’, perhaps – make an appearance any time soon, one of the artists bound to be welcome through its doors will surely be Giorgio Moroder. He is after all the man behind Donna Summer’s I Feel Love, one of the most exciting and most influential electronic records of all time, as well as being a prolific composer of soundtrack albums such as Midnight Express and producer to the greats. However the trouble with being a producer of this stature in modern pop music is the expectations that come with a new record. Especially when that new album, Déjà Vu, is your first in 30 years.

The last time Moroder stepped into the studio with the aim of making a pop record, he was in the company of Human League singer Phil Oakey. That yielded the winsome Together In Electric Dreams – but sadly, any dreams Déjà Vu offers up are closer to the nightmarish variety.

In putting this album together Moroder – no doubt in cohorts with Sony – assembles a formidable guest list, a roll call that on closer inspection is made up of artists no doubt in awe of the producer’s influence. Yet where Moroder’s studio magic, revealed in his productions of Summer, Blondie and David Bowie, was notable for its imaginative and forward thinking rhythms and use of new electronic studio technology, he sounds here like a parody, an artist falling under his own influence.

For these songs, and the production behind them, have little to no edge at all, and are just too safe to rank alongside the Moroder of the late 1970s. There is nothing especially bad about much of the music here – Kylie Minogue’s guest spot on Right Here, Right Now, for instance, the Sia-fronted title track or a relatively spiky Diamonds with Charli XCX. Yet there is nothing that promotes any of the tracks here as forward looking or game changing. Water treading or even rose tinted reminiscing would be more accurate.

Britney Spears’ turn on Tom’s Diner is a prime example, removing every essence of the song’s personality and charm, her storytelling given in flat, robotic auto-tune. 4 U With Love sounds Avicii-lite, while Don’t Let Go runs out of steam long before the end, embodying the formulaic feel of the songs on Déjà-Vu – ironic, given the album’s title.

The exemption from this, 74 Is The New 24, references Giorgio’s age. It is a magnificent and moody piece of electro, brooding from behind that famous moustache, and it is no coincidence that Moroder’s voice speaks loudest through the only purely instrumental track on the album, certainly better than it does in the dodgy rap in Tom’s Diner.

Moroder should be applauded for several things at this point – the drive to make an album now he is in his mid-70s, the clear influence he exerts on artists as current and relevant as Daft Punk – One More Time and the whole of Random Access Memories would surely not exist without him – and the fact he still commands respect, as the profile and guest list of this record prove.

Yet it is surely not wrong to have expected more, given his previous. Hopefully this is a means of blowing away the cobwebs before something more substantial and meaningful appears from Moroder’s studio. The desire is there for more of that visionary spirit – though the suspicion lingers that with everything just simply too available, Moroder no longer has the focus and inspiration that fired his finest work. Let’s hope we get the opportunity to find out further.