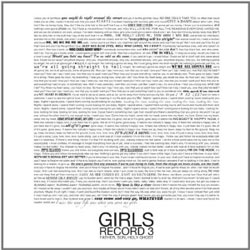 Girls’ Christopher Owens grew up in a creepy Christian cult called the Children Of God. The unusual upbringing of the band’s sole songwriter is easy both to under- and overstate. Living in a succession of foreign countries within a closed community, with popular culture mostly prohibited and a particularly deranged and narcissistic brand of scriptural cant taking its place, is clearly going to be a profoundly disturbing formative experience.

But then it’s perfectly possible to escape the clutches of a cult and become a estate agent, just as one could become a Californian pill-popping musical maverick from the dullest suburban roots. Moreover, Christopher Owens has been a free man, able to soak up music at his leisure, for over a decade now, playing with Ariel Pink in Holy Shit, preceded by an enthusiastic immersal in the Amarillo punk scene.

It’s therefore a little curious that Father, Son, Holy Ghost is the kind of record that could have been made had punk never happened. It draws heavily on the ’60s and ’70s, both fashionable and questionable. Die segues from Muse‘s classic rock Knights Of Cydonia riff into Ziggy-era David Bowie, and several tracks veer into 10CC territory. There are a handful of commercial and concise singles to be picked out. Honey Bunny is a little two and half minute bundle of joy, like Belle and Sebastian covering The Beach Boys‘ Fun Fun Fun, and Magic could have been The Lovin Spoonful‘s final hit. But for the most part, Girls take their sweet time, with most tracks stretching on for five minutes or more.

Forgiveness, in particular, makes you wade through a seemingly endless ocean of acoustic melancholy, before finally offering up a David Gilmour guitar break as reward. The redemption is lyrical, too. Where most tracks allow no hope to shine through the heartbreak, this one admits that while “nothing’s going to get any better”, there is a solution, albeit an ironically Christian one – “I’ll have to forgive you, if we’re ever gonna move on”. Just A Song is three songs, really – an introduction that Simon and Garfunkel would have limited to 15 seconds and they stretch out for 90, more doleful balladeering (“it feels like nobody’s happy now” he sings, generously including us all in his misery), and a flute-laden coda to finish. They are all utterly beautiful.

Vomit is another slow burner, and the lovelorn centrepiece of the album. An acoustic guitar figure with a distinct resemblance to Metallica‘s Call Of Ktulu bursts into a chorus out of Spiritualized‘s top drawer, adds a spluttering guitar solo, and ebbs and flows its way to a gospel-tinged finale. And while Love, Like A River’s doo-wop may be the weakest moment on the album, it’s also the most affecting, harking back to the Everly Brothers songs the teenage Owens would busk to raise cash for his unwanted family.

It’s a record you can spend a long time playing spot the influence with; you’ll have noticed the abundance of bold type in this article. It’s this slight tendency towards pastiche and affectionate plagiarism that leads to the rather trite, glib portrayal of Owens as some kind of musical idiot savant, absorbing and processing new sounds with the wide-eyed wonder of a primitive child given an Etch-A-Sketch. Clearly, such patronising assessments are best avoided and he should be judged like any other musician. The simple truth is, you won’t find a sadder yet more uplifting album all year.