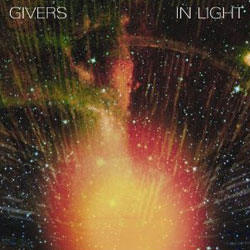 Lafayette is maybe the third or fourth city that comes to mind when you think of Louisiana, should you in fact ever think about Louisiana. It’s known for its Cajun roots, its French backstory, its place in the American Civil War, and its hundred-degree humidity. It is not known for its avant-pop experimentalism. That spiritual incongruity has earned Givers quite a bit of easy copy. It’s not often a band swoons with the same poly-pop intricacy as Dirty Projectors, and its even rarer when they’re not nursing a Brooklyn art space. Their debut record In Light reflects that same gleaming universality, indie-pop complex enough to transcend boundaries and get a world singing. It can make the group sound like virtuosos, if leaving them a little faceless in the process.

There is no shortage of hooks here. Givers have put together 51 ambitiously linear minutes. Peaks and swells escalate with a emphasized continuity – essentially linking together into one long composition, the songs containing only minor variables, with moments of folk, prog, and even saloon-door country surfacing in the sprawl. That makes for something effortlessly smooth, but also awkwardly monochromatic – like a showcase designed to show the peak of limited powers. What is initially novel, intriguing, and relentlessly catchy is ground down into something rather ordinary under the indulgent weight of those 51 minutes. It’s easy to see why these guys first earned notice after the much more manageable weight of an EP.

That’s not to call it a failure – the performance and production are too stellar to be downgraded. One of the best things Givers has going for it is a sort of school-band earnestness, the coalescing sounds are played with pristine directness, completely willing to give itself all the way to you. That transforms the predictable coldness of the complexities of a multi-act piece like Saw You First into something wonderfully human, inviting listeners to clap right along with the sprightly bass drum. They do this without being cloying, or easy, or overwrought, the soul of these songs are peppy, it’s not something implanted, which is something that’s damned plenty of lesser minstrel-ish outfits.

If we could erase from memory all that has gone before, it would probably be pretty easy to fall in love with Givers. To these ears In Light sounds very much like an adolescent record; something that’s struggled, but remains chronically optimistic. Givers aren’t bad, just a little unnecessary; a group that sounds unfortunately generic given the suaveness with which they carry themselves. When In Light is on it steals the stage, but its departure scarcely leaves an echo.

More on Givers
Givers – In Light