Glass Animals – How To Be A Human Being 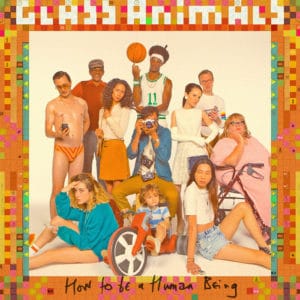 When Oxford four-piece Glass Animals arrived on the scene two years ago with their shuffling rhythms, R&B-inflected beats and electronic structures, they were widely hailed as one of the most interesting and exciting acts in Britain. Despite the pressure on their debut record Zaba to live up to the hype, the band managed to ride the wave of expectation with impressive ease to deliver a slick first effort.

It was by no means perfect, but Zaba certainly tried to bring something new to the table. Following on the album’s success, Glass Animals ended up going on a mammoth tour around the world, playing more than 130 shows last year alone. As such, it is pretty remarkable they managed to find the time to work on their follow-up record, but nevertheless the quartet are back with How To Be A Human Being.

Yet this is is more than just a straightforward album. Not content with being one of the most experimental pop bands around, Glass Animals’ frontman Dave Bayley’s creativity has gone into overdrive. Inspired by the work of American director Jim Jarmusch and the lesser known Errol Morris, each song on the LP is a vignette based around a fictional character. It is a novel ideal, one that has extended to videos and the album artwork.

Such concepts can often come off as a little bit gimmicky, as well as detracting from the actual music. However, in the case of How To Be A Human Being, the detail that has gone into the end product is telling – and the record benefits as a result. Opener Life Itself is a perfect demonstration of how effective the process has been, telling the story of a sad recluse (“I can’t get a job/ so I live with my mom”) before bursting into an infectious chorus.

There is a euphoria about the song, which sets it apart from the denser sound of Zaba, while Youth features a playful, sultry hook that brings Wild Beasts to mind. “Feel you mother at your side/ don’t you know you got my eyes/ I’ll make you fly,” sings Bayley on another feel-good chorus, as the track addresses nostalgia and the contrasting feelings that surround it from the viewpoint of a parent.

Lyrically, the record is far more accessible than its predecessor. Due to the focus on the characters and their exploits (Bayley also recorded stories from real life people while on tour), the randomness of Zaba’s lyrics are a thing of the past. Tracks such as the scattergun Cane Shuga, which deals with a cocaine addict, and the unsettling Mama’s Gun, with its story about mental illness, are to the point.

The highlight of Glass Animals’ return, though, is the excellently titled Season 2 Episode 3. The song focuses its attention on a sluggish, lazy character, whose mind wonders aimlessly – something represented by the references to cartoons and synths that sound like a video game. It’s closely followed by The Other Side Of Paradise, which contains one of the record’s most addictive choruses, and the far more gritty Take A Slice.

In fact, almost every song on How To Be Human Being has some merit, with closer Agnes providing a fitting conclusion. Yes, some of the lyrics still have a tendency to be a bit clumsy in their execution, but it is hard to argue with the ambitious kaleidoscopic approach of Glass Animals to their second album. It sufficiently moves their sound on from Zaba, while also successfully capturing the multifaceted nature of man.