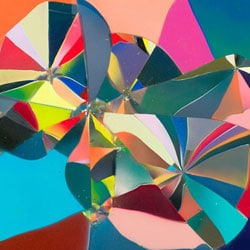 Although Ring is to some degree a collaborative effort at times, Glasser is the embodiment of the artistic outpourings of one person in particular – Cameron Mesirow . Mesirow ‘s parents are both artists in the own right, her mother was a part of the band Human Sexual Response whilst her dad is a member of The Blue Man Group (who most will know thanks to Arrested Development’s Tobias Funke).

It’s no surprise then that Ring has pretensions to be something more than just mere music – apparently the symmetrical nature of Homer’s The Oddessy was considered an inspiration when planning the structure of the album. But get past such lofty ideas and Ring stands comfortably on its own.

Given the album’s professional sound it is quite amazing to find that the album was put together by Mesirow using GarageBand on a laptop. From start to finish, Ring is densely layered, utilising washes of vocal harmonies, various acoustic instruments (glockenspiel is a big favourite), and electronic trickery. The production has had some help along the way, with Van Rivers and The Subliminal Kid lending their talents, but the rough ideas were already well in place before any polishing started. As such, it’s fair to say that Mesirow is an exciting an undeniable talent, and from the first rumblings of the incessant tribal drums that introduce Apply it’s remarkably easy to get lost in Glasser’s world.

Apply itself is pitched somewhere between a battle cry and a peace offering – the drums supply the driving force and the murderous intent along with the droning synths. Mesirow has other ideas however, and with her voice cleverly layered up she guides the personality of the song in other directions. It becomes exotic and otherworldly, like a rainbow rising from the cascading foam thrown out from a waterfall or a bird rising into the sun using the uplift of thermals. There is something about that voice that feels as if it comes from an undiscovered land, and this particular aspect of her range is further highlighted on the likes of Home, which uses handclaps and xylophones to drive home the record’s natural feel. Once again, intelligent use of layering techniques and strings lend a magical quality. Mirrorage’s subtle electronics move Glasser out of purely natural surrounds and into club territory, and yet the quality of Mesirow’s voice shines through, dusting everything with glitter and wonder.

At this point, it’s probably worth mentioning that there are distinct similarities between Glasser and the works of Bj�rk (most notably Debut and the vocal experimentalism of Medulla). Mesirow has comparable vocal traits, and it’s fair to say that her music is equally subtle and unusual, utilising studio technology carefully and mixing it successfully with sounds that can only be described as organic. Treasure Of We is a perfect example of this, with its haunting vocal and scampering percussion allied with the introduction of understated electronic beats.

Such moments are common on Ring to the point where it almost becomes expected. It’s tempting to deride the album as too similar at times, but the truth is that each of these songs is a perfectly sculpted and realised work of wonder revolving around a couple of central themes, which appears to be based primarily in the sounds of the Orient and the South American rainforest. Indeed Glasser’s inventiveness is so impressive on this, her debut, that even the irritating honking saxophone of Clamour is acceptable when worked in alongside Mesirow ‘s multilayered croon.