by Sam Shepherd
published: 4 May 2018 in Album Reviews
Tweet 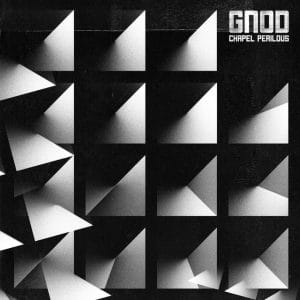 Throughout their existence, Gnod have continuously pushed at the boundaries of transcendental noise and chaos. As a live band, their relentless, brutal assault is capable of opening doors in the mind that hard drugs and meditation (combined) can only hope to emulate.

Capturing that unbridled energy on a recorded work can be something of a challenge. For example, the likes of Swans or Sunn O))) can never really capture the all encompassing oppression brought about by the sheer volume of their live shows. Gnod face similar issues, but somehow they’ve managed to distill what makes them tick in a live setting on much of their recorded work. Their previous album Just Say No To The Psycho Right-Wing Capitalist Fascist Industrial Death Machine was a crushing, exhilarating experience and, with Chapel Perilous, Gnod have managed once again to create something that is both liberating and, at times, terrifyingly oppressive.

The album’s title comes from Cosmic Trigger, a book by Robert Anton Wilson. It’s a term that refers to a psychological state where reality is entirely subjective and imagination, supernatural forces and the natural world are at a hazy crux. According to Wilson, this state leads to paranoia or agnosticism.  Uncertainty over whether you’re being affected by an external supernatural force is never in question when Gnod is involved. It’s practically impossible to not enter a different state of mind when their particular brand of chaos is the order of play.

Kicking off with Donovan’s Daughter, Gnod launch into a 15-minute exploration of sonic oblivion. It starts in relatively subdued fashion, stripped back repetitive riffs underpinned with a skittering drum pattern and disconcerting snippets of noise, before slowly building into an unstoppable cacophonous force. At the other end of the album is Uncle Frank Says Turn It Down. Unsurprisingly, Uncle Frank is completely ignored by Gnod as they unleash another ferocious blast of noise. More concentrated this time, it’s not as ambitious as the “Godflesh in a dub-blender” approach of Donovan’s Daughter, but its rolling riffs create a hypnotic state that would, no doubt, affect Uncle Frank into requesting that they turn it up.  All out sonic brutality is not Gnod’s method for affecting psychological states.

Sandwiched between Donovan’s Daughter and Uncle Frank (ahem) are a trio of tracks that are far more subdued in their approach. Europa’s throbbing bass and percussive clatter calms things down somewhat whist maintaining a sense of unease. A Voice From Nowhere starts with what sounds like a chime from a Tibetan singing bowl, as if Gnod are cleansing their surroundings and preparing for meditation. What follows is a relentless and hypnotic beat populated with feedback and noise that is somehow both unnerving and calming. The undulating thrum of A Body follows and conjures up images of Throbbing Gristle bobbing around on a stormy sea, launching charred corpses into the murky depths. Gnod definitely do subtlety, but it’s still bleak and unsettling.