by Thomas May
published: 25 Feb 2013 in Album Reviews
Tweet 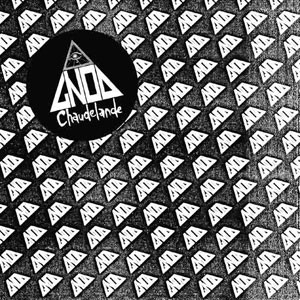 In many ways, this record is utterly ridiculous. Maximalist, joyously excessive and cacophonous, Gnod’s Chaudelande is over an hour of gnarled, visceral sonic assault. A loose collective of musicians hailing from Manchester, Gnod laugh in the face of subtlety and snort at the banality of any music that isn’t recorded with all needles firmly in the red.

Originally released as a two volume vinyl only album on Tamed Records and now being reissued as a double album by the good folk at Rocket Recordings, Chaudelande is the result of a recording session at the eponymous studio in France, elevating their previously overtly lo-fi aesthetic into more expansive, but still suitably ragged, climbs.

This record throbs with a volatile energy, sounding perpetually on the point of complete disintegration as throbbing bass lines collide with slabs of brittle guitar noise and gnashing vocals. Occasionally employing the motorik beat of Krautrock as its foundation, Gnod’s music takes the blueprint of ecstasy-through-repetition laid down by the likes of Can and Neu! and forces it through the fried sonics of the psychedelic noise of Hawkwind – Chaudelande fuses the trance-inducing potency of songs like Hallogallo with a stark, brutish physicality. Opener Tron sets the bar particularly high: ten short minutes of a repeating cycle of gnarred guitar chords thrash atop a stampeding motorik beat, never once feeling in need of further elaboration as the continuous waves of noise become ever more immersive.

This music positively fizzes with the erratic abandon of the energy of a first take, a quality that can come across as something of both a blessing and a curse. For the most part, Chaudelande is effortlessly endearing in its commitment to its extreme levels of aural punishment. But one can at times be left wishing for a more nuanced sensibility. On tracks like Tron, the saturation of the aural space occurring right from the beginning of the song is so complete that little room is left for even cursory development. Not that this is much of a problem per se but it does cause considerable fatigue over the course of the album’s seventy minutes – at worst, this record can feel airless and aggressively uncompromising.

At times, the group does attempt to reign in their all-encompassing noise to craft something more complex. But a relative lack of compositional sophistication keeps these tracks from succeeding in their goal and songs like The Vertical Dead come off simply as anaemic versions of the album’s less self-conscious moments. Perhaps the enjoyment gleaned from this record will largely depend on the attitude with which the listener approaches its chaotic soundworld – just like the Krautrock that inspires it, this album rewards profoundly uncritical listening, orienting itself around unconscious relationships to repetition. Indeed, it is in this way that Chaudelande betrays its immaturity; the album was originally released before Gnod considerably refined their aesthetic on the sublime INGNODWETRUST, released in 2011.

Gnod recently missed out on BBC 6music’s “Tomorrow’s Cult Star” award despite being named amongst the nominees. Not that they were probably much put out; what, exactly, constitutes a cult star anyway? Especially when named as such by the radio station whose listeners recently crowned that wet flannel of a song Clocks as the greatest song of the last 10 years? Gnod are not the next Coldplay. Neither are they likely to be on the road to some sort of indie stardom. Instead, they seem destined to remain a curio, a band talked about in hushed tones by obsessive devotees – perhaps they’re just too cultish to be tomorrow’s cult star? Yet, this seems to be neither here nor there when faced with a record as arresting as this: Chaudelande manages to be both fearsome in its physicality yet simultaneously drugged-out, ecstatic – almost gnostic.