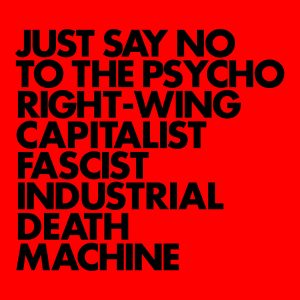 With a title as wordy as Just Say No To The Psycho Right-Wing Capitalist Fascist Industrial Death Machine, you’d think that Gnod has crammed their latest album with politically charged rhetoric. After all, it’s not as if the world hasn’t taken a veer to the right of late and unless you’re particularly pleased with Brexit, the alt-right, Trump, et al, or you’re an aging punk splendidly resident in the USA intent on trolling your rapidly disappearing fan base, there’s plenty going on to work with at the moment.

And yet Gnod’s most verbose statement on the entire album is on its cover. The band’s intention and persuasion is clear, but they don’t feel the need to over-elaborate with their lyrics. As vocalist Paddy Shine points out “music is at its best when it makes you feel strong, when it gives you power you didn’t have before” and what Gnod has done with Just Say No is to keep their statements brief and ally them to a handful of bone-crushing and thrilling sonic vistas. Sometimes a catchy slogan and a fucking huge riff is all you need.

Kicking off with Bodies For Money the album fizzes into life with a truly thunderous riff that sounds like a skronk/fuzz take on Elvis Costello’s Pump It Up. A fairly simplistic but effective take on the human/corporate/work/cash relationship finds Shine hollering “MONEY FOR BODIES!!” over a squall of abrasion. He’s probably not telling you anything you don’t already know, unless you happen to be Rich Uncle Pennybags from Monopoly, in which case, you’ll probably point to your vast empire of Mayfair hotels, railway franchise, and piles of migrant workers stacked in the free parking zone before strolling off, laughing all the way to your offshore savings (it’s legal and therefore entirely ethical). For the record, I’m sure Uncle Pennybags made his fortune simply by creating a best-selling board game, and definitely never cheats when he plays it at Christmas by hiding half the bank under his top hat before the game starts.

Stepping away from all out rock assault, People sees the band move into more industrial territory as Gnod channel the spirit of Throbbing Gristle. As a fuzzed up bass line rumbles and an ominous drum pattern drives the song along with unerring repetition, Shine sums up the way people are going. We’ve not got long to go and more importantly, we get what we deserve. It’s hard to argue with that, particularly when Gnod seem intent on swallowing up any discussion in a wave of feedback, delay and screamed refrains.

Narrowing the band’s focus a little, Gnod celebrate the life and works of a man who, even if he says so himself, is not appreciated. As a fan of repetition, Mark E Smith might well look on Gnod’s sketch of him with some affection. Real Man is the only time on the album where the band look at the human race as anything other than bodies, people, or cogs in the machine. Tipping its hat at post-punk and alluding to a fair few signifiers of The Fall it’s an interesting shift of focus on an album that until this point sums up the human experience as a litany of nullifying experiences and appalling exploitation. Coming on hot on the heels of Paper Error’s meltdown in the print room cacophony, Real Man is a break from the onslaught, but it also suggests a turning point.

Stick In The Wheel follows Real Man and sees some kind of resistance as Shine channels the anger of Black Flag and Minor Threat whilst declaring “I want to be a stick in the wheel, don’t want to be a cog in the machine”. Rather than the ferocious riffing that defined the earlier parts of the album Gnod are freer and more angular now here, part jazz and part Magazine eventually they drift off into ambient territory as the album comes to a close. Whether this desire to destroy the corporate machine and the move into sonically abstract territory is placed directly after a song specifically about Mark E Smith on purpose is anyone’s guess, but the notion that a liberal application of The Fall and the rambings of Jesus H Chr….sorry Mark E Smith might be the wakeup call that the world needs to save it from the monotony of the corporate machine is something too wonderful not to contemplate.