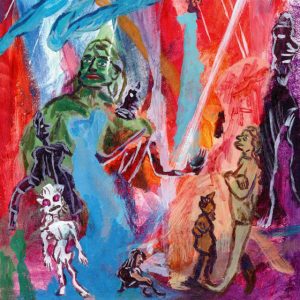 First albums by guitar bands tend not to come out in the wake of much hype these days, but as these things go in 2018 Goat Girl have built up quite a sense of expectation for their debut. This doesn’t seem deliberate, however.

Indeed, one gets the impression that Goat Girl – hidden behind pseudonyms and channelling the slackness of bands like The Fall and Fat White Family – couldn’t really give a shit if anyone’s impatiently waiting for release day, or if anyone thinks the album is any good, or whether the album is, in fact, any good.

Their laid-back, laconic presentation suggests that they are just a band who decided to make an album, and let’s see what happens. It might well be that what looks like the confident insouciance of some millennial musicians is in fact hidden nihilistic indifference: in the case of Goat Girl it may be a bit of both. But the record comes off the back of some strong singles and a deal with Rough Trade, and it’s produced by Dan Carey, so early signs have been promising. And the album too shows great promise, even if it doesn’t fully deliver on it.

With a whole 19 tracks packed into 40 minutes, this album could not be accused of being overlong or padded out. But six of those tracks are sketches or interludes that add little to the album, other than a presumably deliberate mood of disorientation, perhaps reflecting a world in which things don’t always fit together nicely or start and finish when you expect them to. That’s fine as an artistic rationale, but it doesn’t translate neatly to the album.

Burn The Stake, for instance, would have been powerful and manifesto-like, had it been the opening track. It grows from acoustic strumming and a complaint of “Dead weights, zombie states” to a full-throated call to action. But it arrives second, following the instrumental opener Salty Sounds, which neither sets a coherent tone for the album nor interrupts anything that’s come before. Splitting I Don’t Care Pt 1 and I Don’t Care Pt 2 into two separate tracks makes sense; one is jerky and aloof, the other stumbling and awkward, and they make nice companion pieces. But putting the two tracks either side of the aimless piano noodling of Hank’s Theme is a mis-step.

That said, there are some excellent songs here, like the bristling, melodic Viper Fish, the frenetic Cracker Drool and the brash Country Sleaze. Each has a different mood, but they are all tightly played, economical and rousing. Tying the whole thing together are a few well-curated musical and thematic threads, such as guitar parts that pay homage to Pixies and a kind of warped Deep South Americana – it’s just a shame that those threads are tangled and cut at times.

Goat Girl is an all-female band whose gender isn’t something they make a big deal of; they might be an antidote to a male dominated indie rock scene, but they aren’t a deliberately gendered reaction to it. However, some of the best songs here are those that adopt a more directly female perspective – and they are strong tracks both because of the aforementioned tightness, economy and rout, and because that perspective is refreshing. The chorus of The Man – “You’re the man, you’re the man, you’re the man for me” – is simple but ambiguous. Much less ambiguous is Creep, about a sleazy guy on a train, who remains sinister even as the lyrics render him pathetic. “I really want to smash your head in” feels like the only possible refrain.