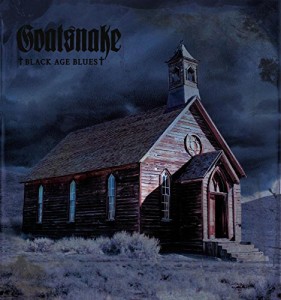 With Greg Anderson so tied up with destroying the eardrums of audiences around the world with drone behemoths Sunn O))) it seems as if there’s just not been time enough in the day for him to explore the joy of the riff. It’s been 15 years since Goatsnake last released an album (although the Trampled Under Hoof EP emerged in 2004), and, apart from an occasional live appearance in recent years, the band has been on ice.

Black Age Blues thankfully sees the end of the hiatus, and it is clearly apparent that Anderson has been stockpiling masses of killer riffs over the years, waiting for the right time and place to unleash them. With the help of Greg Rogers (The Obsessed), new bassist Scott Renner and the phenomenal vocal tones of Pete Stahl (Scream/Wool), Anderson sets about adding to Goatsnake’s small, but perfectly formed back catalogue in some style.

Black Age Blues doesn’t attempt to experiment or meddle with the band’s sound, there’s no point in re-inventing the wheel after all. Whilst there’s nothing here that’s going surprise people, that’s not necessarily a bad thing. The fact that the album kicks off with a quiet nod to the band’s earlier work (The River – the final track from their last album. 2000’s Flower Of Disease) is significant. It’s as if the band are acknowledging the amount of time they’ve been away, but are attempting to assure their audience that everything is just as it was.

Apart from a new bass player, and a couple of intriguing flourishes, there’s very little to worry about. This allusion/in-joke intro, leads into an acoustic blues riff provided by Dave Pajo (Slint) which is then taken on by the roaring onslaught of Anderson’s guitar as River To Cross gets things really moving. Elevated Man’s chug carries things forward ably, it’s a little by the book, but a strong chorus insures that it never strays into tedious territory. The pepped-up head-nodding pound of Coffee And Whiskey ups the ante considerably, Stahl keeping pace admirably as he almost slips into a parody of an ’80s glam-rock vocalist. There’s enough dirt in his delivery to just about pull it off.

The whole song seems to be a nod to excess of sorts, whether it is caffeine, alcohol, or vocal histrionics. Even Anderson gets in on the act and fires off a rare guitar solo. It could be considered a misstep were it not such stupid fun. Jimi’s Gone is another example of the band revelling in riffs and playing together again; it’s as if they’d forgotten what a blast it all was and are taking full advantage. This nod to Hendrix allows elements of soul and blues into the band’s normally doomy outlook. Another guitar solo, some classy backing vocals, and a harmonica break all make for an oddly upbeat appraisal of a dead rock star.

If all this sounds as if Goatsnake aren’t taking it seriously then there’s plenty of evidence to prove otherwise. The title track is a little more straight forward, with its none-more-Sabbath riff, and yet another perfect performance from Stahl. House Of The Moon is a series of skull crushing riffs that makes full use of backing vocalists Dem Preacher’s Daughters, as they take the stoners to church. Grandpa Jones explores similar territory, preaching the good word over colossal riffs. Once again, the union of Stahl and Dem Preacher’s Daughters is perfectly judged, giving the songs on which they appear together a delightful flourish.

Graves is as dark and oppressive as might be expected with Anderson’s riffs dredging the depths as Rogers and Renner lay down simple but dense rhythms. The vocal refrain of “steal the light from the sun” might be a cheeky in-joke, but as anyone that’s seen Sunn O))) can attest there’s little in the way of light to steal; there’s certainly none here.

Graves aside, there’s positivity leaking out of every riff, vocal line and drum hit here. This might be blues, it might be doom, but the return of Goatsnake can be nothing other than a good thing.