Godspeed You! Black Emperor – Asunder, Sweet And Other Distress 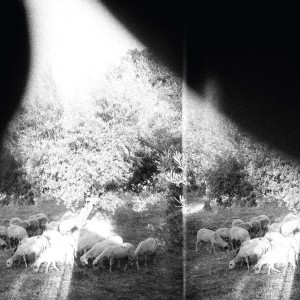 When Godspeed You! Black Emperor returned from their decade long hiatus with Allelujah! Don’t Bend! Ascend! they did so with a collection of reworked and renamed historic material. It was as if they had unfinished business to attend to within the band itself. Not that this prevented their return being any less glorious, and after a series of triumphant gigs and rave reviews the band scooped the Canadian Polaris Music prize “thing”.

It was an award that the band seemed to find no particular value in, and having criticised the event (from the corporate sponsors to the idea of the awards itself) they donated their prize money to a scheme that would provide prisoners with instruments and the chance to make music. In their written address to the attendees at the awards, they signed off with phrase “we love you so much / our country is fucked”.

The band’s latest album carries a certain amount of historical baggage with it. The inner artwork of the album refers back to their awards “acceptance” speech, with their sign off sandwiched between a photograph of an inverted half-mast Canadian flag and a black and white picture of grazing, docile sheep. Whilst GY!BE’s mainly instrumental music always invited the audience to draw their own conclusions, the message here seems to be abundantly clear. Asunder seeks to be something of a wake up call to the country in turmoil, and its people.

The music itself will also be familiar to long term fans of the band, as they’ve been playing it live for sometime now, some times under the fan prescribed title Behemoth, or sometimes a simply “Big Un”. Asunder… is a focused distillation of a composition that is one of the band’s most affecting pieces. At a running time of just over 40 minutes (or infinity, should you leave the locked groove at the end of side one playing until the end of time), this is GY!BE’s most succinct and direct album to date. Consisting of three main movements over the course of four tracks this is an album that works best being listened to as a whole, as the songs move from one to another to create a single narrative. There might be track names, but the album is really just a cohesive body of work.

A drum beat opens the album, which is a fairly rare occurrence for GY!BE, and the band moves into the sprawling and emotional Peasantry or ‘Light! Inside Of Light via a short forewarning of feedback. There’s no slow build here, the band launch straight into a guitar heavy exposition that shares a lot of similarities with the more recent ‘lighter’ Earth albums. The early parts of the song are noisy and portentous, given to mood swings which are finally released in some angry discordant guitar work. From there, the song changes tack with the strings taking over, sounding jubilant and joyous yet also like a funeral march. As the song draws to a close, a militaristic drum pattern takes over as the music moves into sweeping, almost ambient washes that are punctuated with occasional defiant outbursts. If the band were ever to interpret The Last Post, it may sound a little like this.

The album then moves into noisier territory, with the feedback driven Lambs’ Breath clattering like the tracks on a tank or the cogs of a mincing machine, before settling down into quieter drones and finally ending with an apparently endless bass note. Asunder Sweet continues in this vein with strings swelling and guitars squalling, as an ambient fog descends. These two central tracks set a disconcerting scene, and the final movement, Piss Crowns Are Trebled takes full advantage as soon as it begins, with its grimy bassline and soaring strings combine to create something that bears resemblence to the pastoral symphonies. It’s part meditative and also filled with aggression and determination.

There’s a distinct Elgarian influence at work here, the pomp and ceremony of war, and the aching presence of loss and futility. It might well be the band’s heaviest and most forceful moment to date, but it’s also shot through with a series of intense hooks. It’s a simply stunning close to an album that hits hard and serves as a startling call to arms, much like the apocalytic opening statement Dead Flag Blues did when F♯ A♯ ∞ was released back in 1997. The message might be shorter this time around, but it is just as pointed and effective.