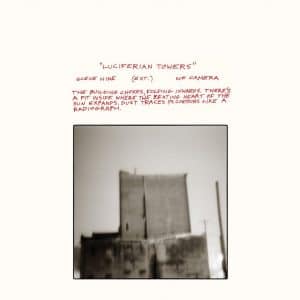 Godspeed You! Black Emperor have always been a political band, it’s just that they’ve never felt the need to express their opinions in the shape of lyrics. Instead, to fully appreciate their intentions, you’d have immerse yourself in the artwork and context of each of their six albums; as a rule of thumb, if the band feel like sharing the context of the album, then that at least serves as some kind of guide.

Do their compositions work without full context? To a degree. There’s no mistaking the sense of impending doom and apocalyptic dread that permeates F# A# ∞ with or without the spoken word introduction, but in order to get the full experience and attempt to make some kind of sense of GY!BE’s albums, they need to appreciated as a whole – from packaging, to artwork, to press release and sometimes, right down to runout groove.

Taking Luciferian Towers on musical terms alone, you could almost be forgiven for thinking that it’s the band’s most uplifting and positive sounding record to date. There are multiple moments throughout where they sound as though filled with the joys of life, and hope springs eternal. It’s fair to say that there is not a piece of music in the GY!BE canon that sounds anything like as optimistic as the compositions here. Considering this is a band who signed off an awards acceptance speech with the words “our country is fucked”, this move towards hopefulness is a surprise.

Of course, whether or not you view this album in those terms is entirely down to how you interpret the sounds you hear. For example, opening track Undoing A Luciferian Tower might start out relatively gently, with lilting flute motifs, but it soon descends (or ascends) into a swirl of droning chaos. Part way between tuning up, and overture and an interpretation of Lou Reed’s Metal Machine Music, some might find it an uncomfortable listen, but in truth there’s beauty and order to be found within the chaos; it just takes a while to find it. Of course for some of us, there’s beauty in chaos and discord too.

It’s perhaps this idea of beauty within the darkness that informs much of this album. The band’s statement suggests that their feelings and creative processes were pulling in different directions during its creation. It is, apparently “a thing we made in the midst of communal mess, raising dogs and children. eyes up and filled with dreadful joy” and that sense of chaos, dread, and joy certainly informs most of these compositions. Their claim that they recorded it in a burning motorboat seems unlikely, but it does conjure up some fairly wild imagery.

All three parts of Bosses Hang sound absolutely jubilant, but the third movement in particular possesses a vital urgency a cavernous wall of guitar scree and wonderful elegant string parts, that are positively infectious. It’s hard not to be swept along with the band as they reach the payoff. The very idea that a title like Bosses Hang could be attributed to a composition that sounds as graceful as this is one step away from tagging it with “Lick My Love Pump”.

And this is a dichotomy that runs through much of the album.   The closing track, Anthem For No State, is another slow burning yet elegant and masterful composition that channels neo-classical orchestration, wah-wah driven blitzkrieg, a militaristic stomp and a wild-west guitar hook of which Ennio Morricone would be proud. As it builds towards its climax, it feels like something of a glorious last stand and a rallying cry. There’s hope in the soaring brass and strings, and it is infectious.

The list of demands the band issued upon the impending release of the album – an end to foreign invasions; an end to borders; the total dismantling of the prison-industrial complex; healthcare, housing, food and water acknowledged as inalienable human rights and the expert fuckers who broke this world never get to speak again – all seem achievable. These are dark times indeed, but albums like Luciferian Towers help to provide a guiding light. Even if that light comes from buildings and motorboats on fire.