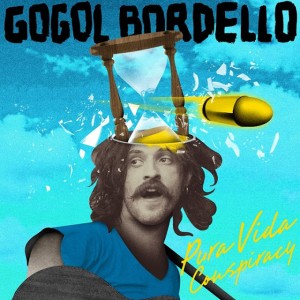 There are 101 reasons to love Gogol Bordello, only some of which stem from the quality of their musical output. Their recording and touring life is portrayed as a continuous explosion of joyous anarchy, with the band something of a law unto themselves. Whether or not this deliberately perpetuated mythology is true, the simple facts about the band are interesting enough.

Gogol Bordello’s members are of all ethnicities, ages and musical dispositions, and fittingly formed in New York, historically the world’s immigrant centre. Gogol Bordello have – under the charismatic leadership of Eugene Hutz – made it their mission to penetrate the Western world with all types of gypsy music carried by a highly idiosyncratic take on punk. Hutz’s is an intellectual endeavour: ‘Gogol’ is apparently a reference to the author, while Hutz’s lyrics and unpretentious reflections on the state of the Western world in general are challenging, earnest and worthy of attention.

The same goes for Gogol Bordello’s music. The band really only sound like themselves, and have the foundations of their sound nailed down: by now enough people appreciate what they do that they’d have to do something really awful to open themselves to damning criticism. The danger for a band in such a luxurious position becomes the temptation to rest easy and make the same record again and again. Luckily, sixth album Pura Vida Conspiracy offers sufficient innovation in both musical and thematic terms to please old and new listeners. Crucially, Hutz continues to develop the improved melodic sensibility that debuted on previous album Trans-Continental Hustle. Pura Vida Conspiracy is in some ways a risk-taking record, with a new thoughtfulness on show when it comes to song structure and the use of instrumentation. Heartfelt and infectious, the album stands level or ahead of any of the band’s previous output.

Hutz has long had the established order of things in his lyrical sights, and Pura Vida Conspiracy shows no sign of any mellowing on his part (or for that matter on the part of his band). What is new, perhaps, is the level of introspection. Lost Innocent World is a tale of the abandonment and rediscovery of home told from what seems to be a highly personal perspective. The narrative takes place in a familiar Hutz-world, be it an embellished reality or total fabrication – who knows? Borders are crossed, ships are illegally bordered, deep emotional turmoil is encountered. Hutz creates an emotionally involving tale with lines like “What is my sin?/When will my ship come in?”, followed by a request to a sailor to “Bring me place where father showed me my first guitar chord/…Place where my friends are still alive.” Sentimental without being cloying, Hutz is a master at engaging his audience with his emotional preoccupations.

Borders are a reoccurring theme, and are especially prominent on the grooving opener We Rise Again. Hutz uses the chorus to assert that “Borders are scars on face of the planet.” In the first of the ‘Making Of’ videos for the album’s promotional campaign Hutz repeats the lyric to camera and says “It’s true, but also, what are you going to do about it?” While Hutz fails to provide an answer – that might be a little much to expect – the point is for the listener to have a good old think about it, and maybe (hopefully) to get a little bit angry about it. We Rise Again is a sort of manifesto, a gypsy punk call to arms, and it’s a fantastic way to open an album.

It Is The Way You Name Your Ship, Dig Deep Enough and Amen are equally rousing, and are evidence of a new sophistication reached by the band. Amen makes effective use of dynamics and relatively thin textures in order to add emphasis to the rousing choruses. No longer are Gogol Bordello content simply to go into double time in order to create excitement. Instead, they play with darkness and light and a range of emotions to pull their listeners along with them. Nowhere is this more successful than on John The Conquerer (Truth Is Always The Same). The false climax halfway through the first verse is nakedly manipulative, and the level of attention to detail is impressive. Gogol Bordello now sound truly skilful – the needle and thread approach on display here is a pleasant surprise and a little unexpected. Despite being in some senses chained to their sound, there is clearly far more room for the band to develop than might have been suspected.

John The Conquerer is the album’s crucial track, in fact, as it follows a couple of tunes that, while fun, add little to the album. Both aren’t much above the level of filler – the chants of My Gypsy Auto Pilot fill the gap where a proper chorus (one with some kind of memorable tune) would have been welcome. Still, to have songs like these as the expendable moments of your record is no real shame.

If Gogol Bordello continue on their current trajectory, then they’re worth getting excited about all over again. There’s every sign that the ‘gypsy punk’ tag will soon mean little more than a mood and an ethos, as far as their music is concerned, as on every level their music is becoming more interesting and more complex. Strangely, this record might be the first grower they’ve ever made, sacrificing some immediacy for subtlety and, presumably, greater endurance.