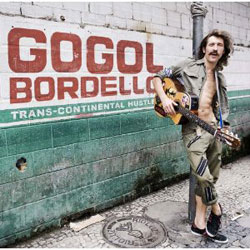 What an unlikely pairing Eastern Europe-via-New York gypsy punk rockers Gogol Bordello and producer Rick Rubin, known for his work with just about every rock band, make. Anyone who’d lost faith in the über-producer and Sony Music bigwig after realising that all the bands he worked with tended to come out of the same nu-rock mould is in for a surprise; his work on Trans-Continental Hustle is surprisingly efficient and elevates Gogol Bordello to a new level.

Or perhaps it’s because the band is fronted by the equally visionary Eugene Hutz, who sees music as an anthropological study. The Gogol Bordello singer-songwriter moved to Brazil two years ago and his new exotic surroundings have added new flavours to his music: a little samba here, some ska there or a bit of Brazilian gypsy influence mixed up amongst it all results in the band’s richest album yet, both in content and sheer insanity. As the title suggests, Trans-Continental Hustle really does cross continents, from Eastern Europe to South America. It’s a paean to global culture.

Pala Tute opens with a western-rooted acoustic guitar, but a few seconds later veers into gypsy folk territory, conjuring images a drunken musical orgy in a hillside village where all sing along in drunken harmony. Companjera, one of the strongest tracks, follows and features elaborate violins and clear-cut harmonies. Sun On My Side is tainted with melancholy and taps more into the band’s folksy roots, but the tempo picks up again on Rebellious Love and grows even tougher on the soon-to-be-concert-favourite Immigraniada (We Comin’ Rougher), where rock, punk, gypsy and Latino collide and explode with fat bass lines, thunderous drums, smart riffs and melodic strings. It’s like what might have been had The Clash had gone gypsy.

Throughout, Hutz sings with passion. In the closing title track, Hutz makes his life mission clear: “I’m on a quest to never rest with my contaminated friends.” We believe that he believes every word he utters, even if we can’t always comprehend what he’s on about; on Raise The Knowledge, he pronounces “raise” as “rise”. But we’re more taken with the violin acting as lead guitar than his elocution.

Hutz is quite a character, but also a smart vocalist and lyricist, dwelling into love, freedom and the plight of the Romani gypsies, often forced into immigration. He evokes the latter on Immigraniada, In The Meantime In Pernambuco – “Never did I fit the frame invented by the gringo” – and the rock-infused Break The Spell: “You love our music but you hate our guts,” referring to their persecution. His delivery is fierce and his voice often becomes an instrument in its own right by creating sound effects. There is a more conscious discipline this time round, but he’s at his best when he’s belting it out at full volume.

Rick Rubin has shaped their songs, smoothing down some of their rougher edges, but the end result is as rich and diverse as ever, helping them fulfill their musical mission with more focus, yet without compromising their eccentricity or their trusted formula.