Goldblade – The Terror Of Modern Life

by Martin Headon
published: 20 May 2013 in Album Reviews
Tweet 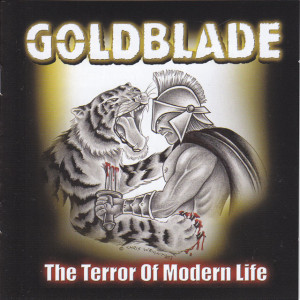 “STILL FIGHTING THE PUNK ROCK WAR,” proclaims the Goldblade website in block capitals. Like Japanese soldiers, hiding out in the jungle with straggly hair and a broken radio, they refuse to believe the fighting can possibly be over.

Except that the punk rock war was won. It rarely filled stadiums, but its DIY ethos and lack of pretension damaged and infiltrated pop and rock alike. Sex Pistols gigs weren’t just attended by punk pin-ups, but by the pioneers of new wave, post-punk, and indie too. Morrissey was President of the New York Dolls fan club. Even the mighty Iron Maiden were only able to get a record deal in the late ’70s with a significantly more streamlined sound than their bloated influences. Its ’90s revival in America sold records in bucketloads.

But despite the movement evolving, diversifying, and conquering, on The Terror Of Modern Life Goldblade still reach back to the original, raw sounds of the late ’70s for their inspiration. From John Robb’s Johnny Rotten howl to the Sham 69 gang choruses, there’s barely a single moment that can’t be traced directly back to the trailblazers. When they dip into other styles, it’s the same Jamaican diversions that The Clash took. This isn’t punk rock. This is classic rock.

And yet, it’s curiously enjoyable, and at times eye-opening. There’s nothing to make the bowels shift in dread quite like hearing that a band has produced a song called We’re All In It Together, but by the time the key change in the final chorus sends the track into overdrive, their intent is clear – not to deride the phrase with the expected clunking sarcasm, but to reclaim it as an anthem for dissent. Meanwhile, it’s a pleasant surprise to hear the discordant introduction to Slayer‘s Hell Awaits over the guitar chug of Someone Stole My Brain.

The album works best when they pick up the pace, cranking out two minute gems like My Mind Is Like An Atom Bomb and They Kiss Like Humans, with its genuinely disconcerting backing bellows. And in The World Is Fucked Up Nowadays and Psycho Takes A Holiday, they have a pair of infectious refrains to match the best of Rancid‘s take on the genre. It’s only when Robb’s lyrics implore you to take the whole thing seriously that it becomes at all tiresome.

It’s curious that such a noted chronicler and historian of punk as Robb should overlook the uncomfortable fact that the punk movement is a good three and a half decades old. That’s the equivalent of those anti-stars of the late ’70s taking on the establishment by playing Glenn Miller tunes. Perhaps the punk rock war is still being fought, but if it is, Goldblade aren’t the army. They’re The Sealed Knot.