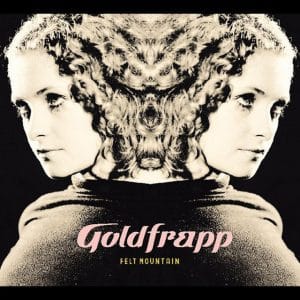 This marvel of a recording could possibly be a contender for the year’s best album. All of the nine tracks on Goldfrapp‘s Felt Mountain are written, performed, produced, and mixed by Alison Goldfrapp (vocals, whistling and keyboards), and film soundtrack composer Will Gregory (keyboards, orchestral arrangements). Critics everywhere are falling over adjectives to describe this band, who seem to be the first development of orchestral trip-hop music to happen since… well, since Portishead. This is not in any way to suggest a lack of originality, for this debut is as original as you could ever want.

Alison Goldfrapp’s vocals, also heard on records by Massive Attack and Tricky, in places heavily morphed by ProTools, are superbly backgrounded by double bass and strings, sound effects and high pitched guitar-keyboard-noise sounds which demands attention from all around as well as the listener. Close your eyes, sit back, and play at full volume. Let the beautiful harmonies, gorgeous melodies, and wonderfully eerie orchestral sounds engulf you into a dream world.

Particularly fantastic tracks include Utopia and Human, a middle eastern-influenced upbeat gem. The final track, Horse Tears, contains atmospheric lyrics (“Night has fallen/ Mute and cold/ My horse is crying”), which sound like they might’ve been influenced by Sparklehorse.

Think a peculiar wonderfully atmospheric mixture of Space, John Barry and Ute Lemper in seductively slow motion. Superb; as is Alison Goldfrapp’s cover photograph. This album is worth buying for the cover alone – and that’s before we even listen to it.